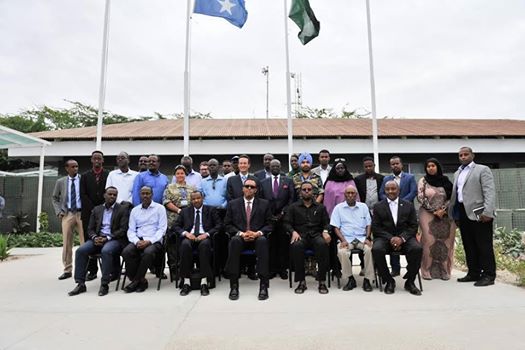 MOGADISHU (HAN) July 10.2016. Public Diplomacy & Regional Security News. The Deputy Prime Minister H.E. Mohamed Omar Arte today chaired a meeting on policy making in Maritime and Coastal Protection Agency. also involved Minister of Ports & Marine Transport Somalia Nur Farah Hirsi Deputy and Minister of Foreign Affairs Ahmed Ali.
The purpose of the meeting was re-organize the previous law in 1959, with the UN IMO legislation that works for coastal protection laws.
Deputy Prime Minister Mr. M. Omar said the bill included the protection of natural resources in the seas of Somalia, maritime trade by 2030 are expected to double.
He noted that the government supports the international laws of the sea and washing the current review process of making Somalia. The same rules will work on the protection of young people dying at sea, by destroying our migration networks.
Finally, H.E Mohamed Omar thanked everyone who contributed to this rule, especially in the IMO and the Agency presented the Ministry of Ports and Marine Transport.