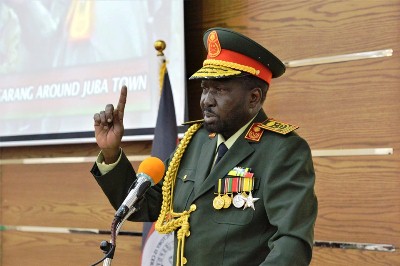 November 27, 2019 (JUBA) – South Sudan National Security Service recruited a new force of at least 10,000 fighters from communities in the former Warrap State, contrary to provisions of the peace agreement, a United Nations Panel of Experts said in a new report to the Security Council.

The Panel, on Friday, said fighters recruited from Gogrial, Tonj and Twic States, have been training in Tonj South County since August.

The Panel said South Sudan’s President Salva Kiir has exhibited no intention of relinquishing key security powers retained by the National Security Service, which has continued to operate unchecked.

“As the Panel has previously reported, the Director General of the Internal Security Bureau, Lieutenant General Akol Koor Kuc, has continued to suppress dissenting voices with no regard for legal due process,” it noted.

A civil war broke out in South Sudan in December 2013 when President Kiir accused his former deputy Riek Machar of an attempted coup.

In September 2018, the warring factions signed a revitalized peace agreement to resolve the conflict, which killed nearly 400,000 people and displaced millions.

The Panel of Experts, however, told the Security Council that the South Sudanese government has been unwilling to allocate resources to fully implement the pre-transitional provisions, especially on the security arrangements.

“The Government has not met its obligations to disburse sufficient funds for the implementation of the peace process, and the National Pre-transitional Council has not managed its funds transparently,” further notes the report.

It added, “Despite the pledge made by the Government in May 2019 to disburse $100 million for the peace process, which already represents a significant reduction from an initial budget of $285 million, it has allocated only about $35 million”.

Meanwhile, South Sudan government has been accused of allegedly pursuing a strategy to split and co-opt the leadership of both signatories and non-signatories to the peace agreement.

The Panel said it corroborated the fact that in Maiwut State, the Government has taken advantage of an internal conflict within the Sudan People’s Liberation Movement-Army in Opposition (SPLM-IO) to weaken the latter’s power base.

“The Government has also attempted to weaken the new alliance of non-signatories, the South Sudan Opposition Movements Alliance, while continuing to conduct a military offensive on the ground against one of its members, the National Salvation Front,” it noted, adding “The Government risks undermining the ceasefire with this strategy”.

Similarly, South Sudan government’s commitment to the full implementation of the peace agreement has been doubted, citing its move to co-opt opposition signatories into the Revitalized Transitional Government of National Unity (R-TGoNU).

This strategy, the Pane’s report observed, proved successful with most of the South Sudan Opposition Alliance (SSOA), which de facto has split into multiple groups.

On November 7, President Kiir and Machar agreed to delay key benchmarks in the peace agreement by 100 days. The delay in forming a national unity government on November 12 came amid concerns from the Machar-led group that the security arrangements were incomplete.