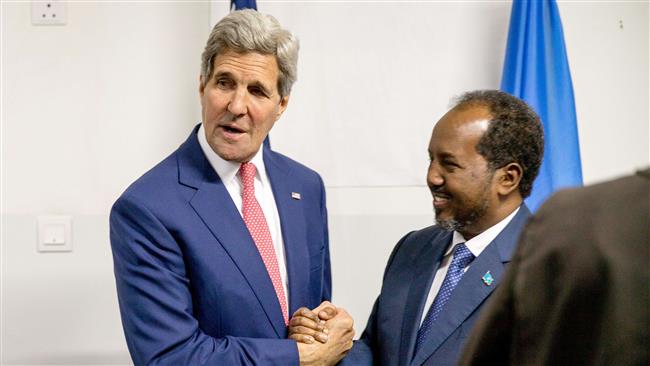 Mogadishu (HAN) May 5,2015 – Public Diplomacy, Regional humanitarian Security News. John Kerry made an unannounced visit to Somalia on Tuesday — the first U.S. secretary of state ever to travel to the country riven by decades of war and grappling with an Islamist insurgency.

Kerry was greeted upon arrival in Mogadishu by Somalia’s President, Hassan Sheikh Mohamud, who called the visit “a great moment” for his nation.

“I’m glad to be here,” Kerry said, asking if the president had spent a “long time” waiting for his arrival.

Kerry’s visit — although quick — sent a strong message about U.S. involvement in Somalia, which long has been colored by the 1993 “Black Hawk Down” operation in which 18 American troops were killed when militants shot down U.S. helicopters in Mogadishu.

Somalia has lacked a strong central government for more than 20 years — and been battling the scourge of al Shabab, the al Qaeda-linked terror group behind last month’s deadly attack on a university in neighboring Kenya.

In recent months, though, the U.S. administration has taken note of an increasingly organized Somali government. President Obama in February nominated Katherine Dhanani to serve as America’s first ambassador to Somalia since 1991.

Kerry said Tuesday that U.S. efforts to re-establish a diplomatic outpost in Somalia were recognition of the progress the nation has made.

“Over the past quarter century, you have known immense suffering from violence, from criminals, from sectarian strife, from dire shortages of food, and from an inability to remain safely even within your villages and homes,” he said in a video message to the people of Somalia.

But, he added, “Somalis are resilient and determined” to reclaim their country from “terrorists and militia groups that have been attempting to steal it.”

“The world cannot afford to have places on the map that are essentially ungoverned. That is why Somalia’s return to effective government is an historic opportunity,” he said.

During the visit — which lasted just over three hours — Kerry held meetings with the country’s president, prime minister and members of civil society.

A senior State Department official said the “historic” visit would “send a strong signal” to the Somali people about U.S. commitment to the nation.

“It will send a strong signal to al Shabab that we are not turning our backs on the Somali people and that we will continue to engage with Somalia until we bring al Shabab’s terror to an end,” the official said ahead of the visit. NBC