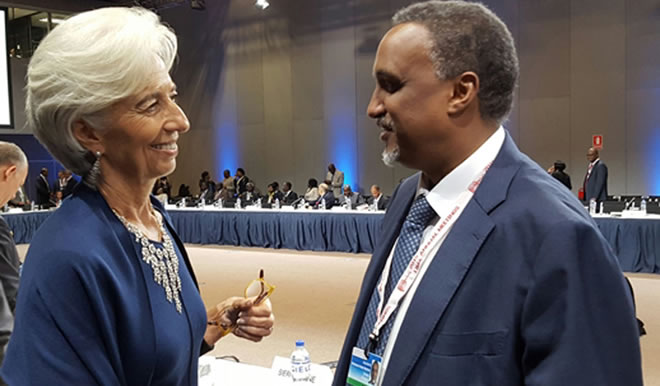 Somalia may be eligible to tap financing from the International Monetary Fund and other multilateral lenders if it maintains a reform program intended to help rebuild the country’s war-shattered economy, the IMF country head said.

Prospects for peace after more than two decades of conflict have been boosted after Somalis agreed to elect a new administration on Oct 30, Samba Thiam said in an e-mailed response to questions Aug 9.

The IMF expects the Horn of Africa nation to open up to foreign capital as the government continues to improve its management of the economy, he said.

“Progress has been made already in the areas of investment law, procurement, contract concessions, public financial management and anti-money laundering,” Mr Thiam said.
“If the current and subsequent programs are successfully implemented, in the future Somalia may indeed access IMF financing.”

Somalia’s US$6 billion economy has been devastated by civil war that began in 1991 and a subsequent Islamist-militant insurgency that has destroyed much of the country’s political and economic institutions, according to the World Bank.

Income per capita is estimated at US$435, making Somalia the fifth-poorest country in the world.

The IMF and World Bank are supporting a raft of reforms that are making Somalia’s business sector “more attractive,” Mr Thiam said. Donors have provided US$10 million to develop local skills, he said.

The IMF has also backed a plan by the Central Bank of Somalia to print its own currency by 2017, Mr Thiam said. The bank is in the final phase of discussions with donors to secure funding for currency reforms, Governor Bashir Issa Ali said in a phone interview from the capital, Mogadishu.

Somalia’s economy will probably grow 3.7 per cent this year and next, according to IMF estimates. Increasing security and government extending areas under its administration may boost agricultural output, Mr Ali said.

Somalia’s army, backed by African Union peacekeepers, has been recapturing territory in the south and centre of the country previously controlled by al-Qaeda-linked al-Shabaab insurgents since, forcing the group to withdraw from Mogadishu, the capital, in August 2011.

“The political process underway is very positive for everybody,” Mr Ali said. “Our problem is not the economy but peace.” Somalia’s presidency has said oil and gas output may begin by 2020 after exploration work showed the potential for large offshore deposits.

Companies including Royal Dutch Shell Plc, Exxon Mobil Corp, and BP Plc are in talks about returning to the country, the presidency said in August 2014.

Institutions and effective legislation, along with the ability to negotiate contracts with oil and gas investors should be in place before any permits are issued, Mr Thiam said.

“With clarity on legal issues, support of the international community, we may see an interest in the oil and gas sector after the elections,” he said.