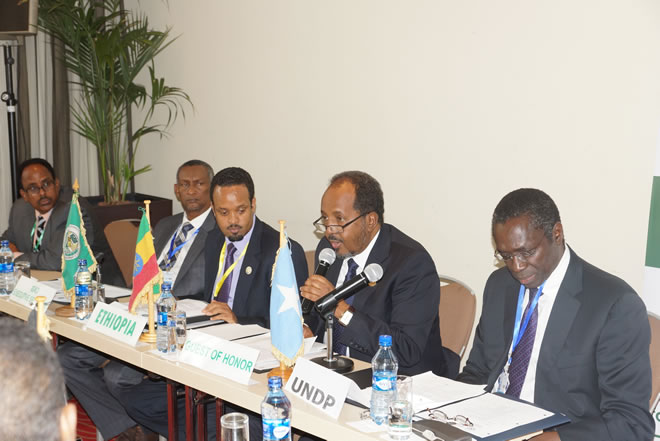 Addis Ababa (HAN) July 13, 2015 – Public Diplomacy and Regional Security Initiative News. The Intergovernmental Authority on Development (IGAD) and the Ministry of Finance and Economic Development (MoFED) of Ethiopia, with support from the UN Development Programme (UNDP), this morning held a ministerial round table meeting on “Remittances as a Tool for Financing Development and Meeting Food Security” for IGAD members states Ministers of Finance, development partners and representatives from foreign governments at Radison Blu Hotel in Addis Ababa, Ethiopia.

The President of the Republic of Somalia, HE Hassan Sheikh Mahamoud, graced the meeting with a keynote speech in which he acknowledged “the need for effective regulatory framework” for remittance systems, while pleading that measures such as “closure of bank accounts of money transfer operators serving Somalia and the region” were “counterproductive”. “The only viable and sustainable solution to addressing this issue is to strengthen and formalize the financial sector in Somalia, establishing financial systems with effective oversight and supervision”, he said.

He also reminded the audience that the “issue of remittances is not just unique to Somalia’ and that is was “a key source of external resource flows for all developing countries, which far exceed official development assistance”.

In his opening remarks, the Executive Secretary of IGAD, Ambassador (Eng.) Mahboub Maalim, stressed the plea undertaken by IGAD as a regional institution for a fair and balanced approach to remittance systems by all. He reminded the audience that IGAD embarked very early on high level meetings at the United Nations headquarters in New York and at the European Union headquarters in Brussels to sensitize world powers on the threats posed by the closer of bank accounts of money transfer operating in Somalia and the IGAD region.

The Ethiopian Minister of Finance highlighted the positive effects remittance has on the IGAD region. He pointed out to researches indicating that “there is empirical evidence in favor of a positive role of remittance” and concluding that “remittances do reduce poverty rates”. He then declared the meeting officially open.

The objective of this Intergovernmental Authority on Development (IGAD) High Level Ministerial Roundtable Discussion on Remittance was to review the linkages between remittances, financing of development, and household food security in IGAD Member Countries with a view to formulating appropriate policies that enhance remittance contribution to local, national and regional economies and while protecting the remittance flows. The other objective is to assess the impact of challenges that Money Transfer Operators (MTOs), or remittance companies, especially after legislation in the US, UK and Australia made it increasingly difficult for people to transfer money to receiving countries.