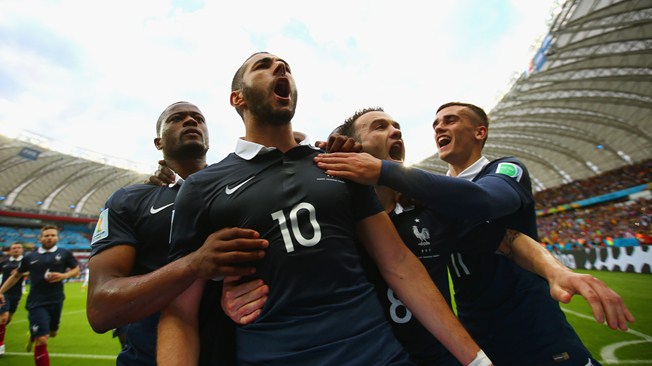 Sao Paulo (HAN) June 15, 2014- Geeska Afrika Online. France have made a perfect start to their Brazil 2014 campaign with a Karim Benzema-inspired 3-0 win over ten-man Honduras. The Real Madrid striker scored twice and had a large hand in another as Les Bleus moved to the top of Group E with an emphatic victory at Porto Alegre’s Estadio Beira-Rio.

However, while the final scoreline may suggest a mismatch, this was a game that hung in the balance until turning on Wilson Palacios’s 43rd-minute red card. Blaise Matuidi had come closest prior to that pivotal moment, forcing a superb, instinctive save from Noel Valladares, who tipped the French midfielder’s stabbed shot on to the top of the crossbar.

But just as Honduras appeared set to return to the dressing rooms at half-time having kept a clean sheet, Palacios conceded a penalty and was sent packing for a clear barge in the back of Paul Pogba. Benzema accepted responsibility for the resultant kick and dispatched it in fine style, sending Valladares the wrong way with a powerful shot high to the keeper’s right.

That same duel, between keeper and striker, was to be reprised shortly after the restart – and again it ended in agony for the former. This time, Valladares endured the indignity of scoring an own goal, spilling the ball over the line in his attempts to gather a Benzema volley that had rebounded off the inside of the post.

And while there was an element of revenge when the Honduras captain denied his nemesis a second goal seven minutes later with a superb point-blank save, no-one was going to prevent France’s No10 from stealing the headlines. With 18 minutes remaining, Benzema secured the win – and pole position in Group E – with the pick of Les Bleus’ goals, smashing an unstoppable shot into the net from an acute angle after Mathieu Debuchy’s initial effort had been blocked.

France will now march on to face neighbours Switzerland, who also began with a win, while Honduras will aim to get off the mark against the section’s other pointless team, Ecuador. FIFA