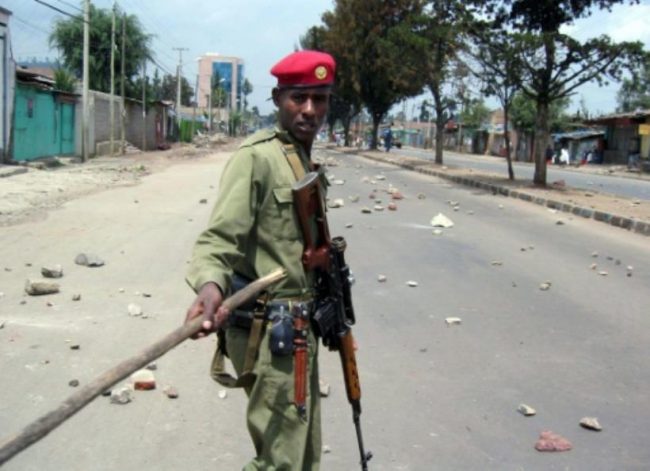 According to Addisu Arega Kitessa, the Oromia regional state communication bureau head, the three people were killed “in a violence in the city of Nekemte” and “properties belonging to private individuals and the government were damaged”. Addisu gave no further explanation on the cause of the violence other than saying the regional government would work with the people to bring to justice individuals who perpetrated the violence.

However, social media activists, including blogger Daniel Berhane,  “a mob backed by Oromia special police killed three Tigrayans by stoning in Nekemte today.” Daniel gave no evidence so far to his claims that the region’s police “backed” the “mob”. Graphic pictures showing what appears to be three dead bodies laying in separate places were also circulating on Ethiopians social media space. Other Tigrayan social media activists also blame the killing as identity-targeted killing.

Despite several attempts to reach out to contacts in the city throughout the say, Addis Standard couldn’t manage to establish one as of yet.

The incident came amidst increasing death toll witnessed on  separate occasions in the last three weeks in Oromia regional state. On October 26, at least ten people were killed and 20 more wounded in a fresh round of protest that started on Tuesday October 24 in Ambo city, 125 km west of Addis Abeba and one of the epicenters of the 2014-2016 Oromo protests. And on the weekend of Oct. 22 in a violence that followed a peaceful protest at least 20 people were killed  in Buno Bedelle zone, three different woredas (smaller administrative unites) of the Oromia regional state in western Ethiopia.

Eight more people were killed during this past weekend and several houses were burned in clashes between residents of  Benishagul Gumuz regional state, about 403km from the capital Addis Abeba, in Kemashe Zone, Lojiganfoy woreda, in Western Ethiopia, according to Negussu Tilahun of the Amhara regional state communication bureau head. Several others were hospitalized in Nekemte Hospital, the same city of today’s incident.Although Nigussu mentained that the violence was caused due to personal animosity between two individuals, residents interviewed by the BBC Amharic saythey were often threatened due to their identity.

This spate of latest violence was initially preceded by yet another killing of three people by security forces in Shashemene town, 250 km south east of Addis Abeba, in west Arsi zone of the Oromia regional state. On the same day three more people were killed in Bookeeti town, west Hararghe zone of the Oromia region in eastern Ethiopia, where more than 30 were also wounded. AS