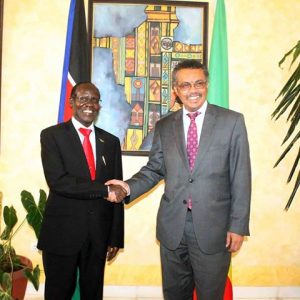 On the occasion, Mr. Wani briefed Dr. Tedros on South Sudan’s current peace implementation process and its progresses. He said the August 2015 Agreement on the Resolution of Conflict in the Republic of South Sudan has started to show optimistic trajectory despite few areas of concern, which he said would be addressed in due course with the support of IGAD and the Troikas.

The Vice President also noted the importance of reinvigorating South Sudan’s economy through bilateral trade and investment. Upon welcoming the positive progress in the country, Foreign Minister Dr. Tedros Adhanom also noted the importance of revitalizing South Sudan’s economy. Doing this, the Minister said was necessary to achieve sustainable peace.  In such score, the Minister reassured South Sudan’s Vice President on  Ethiopia’s readiness and commitment to work together to strengthen the bilateral relation with a view to broaden and strengthen partnerships on issues of mutual interest. 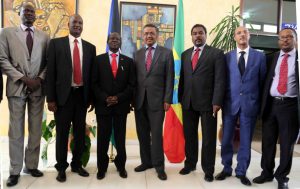 Dr.Tedros mentioned the Ethio-Djbouti economic cooperation as exemplary, out of which lessons should be drawn for further cooperation with South Sudan. The Minister also reaffirmed the continued engagement of the Government of Ethiopia and IGAD in realizing the full operationalization and implementation of South Sudan’s peace deal.