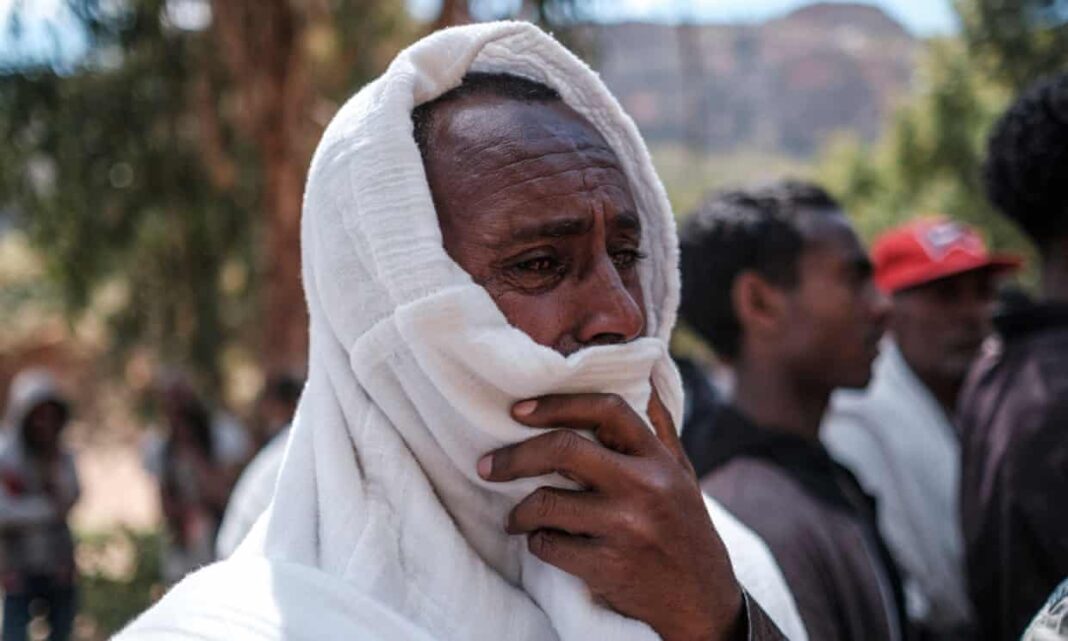 Ethiopian troops and their allies in the restive northern province of Tigray face a growing insurgency fuelled by a series of massacres and other violence targeting civilians.

The country’s prime minister, Abiy Ahmed, launched a military offensive four months ago to “restore the rule of law” by ousting the Tigray People’s Liberation Front (TPLF), the political party in power in the province, following rising tensions and a surprise attack on a federal army base.

Despite government claims of a significant improvement in the security situation in recent weeks, tens of thousands of Ethiopian troops and soldiers sent by neighbouring Eritrea to support Addis Ababa’s military operations appear to be facing continuing resistance.

Mekelle, the provincial capital, is relatively calm, but there are reports of fighting elsewhere. Around a third of the province may remain out of government control.

A series of fierce clashes took place in mid-February around Samre, a small town 40km south-west of Mekelle, as thousands of Ethiopian troops supported by artillery, tanks and airstrikes batted forces loyal to the TPLF dug in there.

Residents in Adigrat, in north-eastern Tigray, say they have heard heavy weapons firing for days in hills around the town. Similar reports came from the town of Adwa on a strategically important crossroads near the border with Eritrea, and multiple other locations.

There are also reports of ambushes and other clashes in central and western Tigray, but with tight restrictions on the media and communications cut to most of the province, confirming details is difficult.

In its most recent report on conditions in Tigray, the UN said intensified fighting had been reported across the province.

Abiy declared the war over in December after the TPLF leadership evacuated Mekelle and an interim administration loyal to Addis Ababa was installed. The TPLF suffered heavy casualties in the conflict and lost much of its military hardware.

Since then, however, it appears to have regrouped. Several senior TPLF leaders have been captured, but others remain in mountainous areas and have been able to contact analysts, media and supporters outside Ethiopia in recent days.

Getachew K Reda, a former TPLF minister, sent a series of tweets from an unknown location earlier this week, his first since November, and the TPLF president, Gebretsion Debremichael, gave an interview to CNN.

US and European intelligence officials have been following the fighting for Samre closely, looking for indicators of the intensity and possible future course of the fighting in Tigray.

One said the battle suggested a “complex, dynamic and chaotic” contest was under way. The TPLF “got hit pretty hard in the first months and took some time to recover. Now they seem to have rallied,” the official said.

Samre, a cluster of steel-roofed homes and a market on a plateau, has exchanged hands repeatedly since mid-November. When TPLF forces last withdrew in mid-February, much of the population fled too and suffered casualties from airstrikes and artillery shelling, according to residents. Government troops are alleged to have then emptied grain stores and destroyed orchards in reprisal for people’s support for the TPLF.

Local sources reported on Wednesday that Eritrean soldiers in the town had told the remaining civilians that further support for TPLF forces would be severely punished. According to one unconfirmed account, the soldiers threatened amputation of a hand and a foot, reference to a punishment 19th-century Ethiopian kings meted out on traitors in times of war.

One senior TPLF leader said its military commanders had been told not to hold positions that would make them vulnerable to the superior firepower of federal forces, particularly in rural areas.

“Landscape is decisive,” said Wolbert Smidt, a German historian and ethnographer who has lived and researched in Ethiopia for decades, mainly in Tigray. “The population is largely rural, using paths and communication networks known only locally. This is why governments in the past have never been able to establish effective control without a certain degree of recognition of local autonomy.” 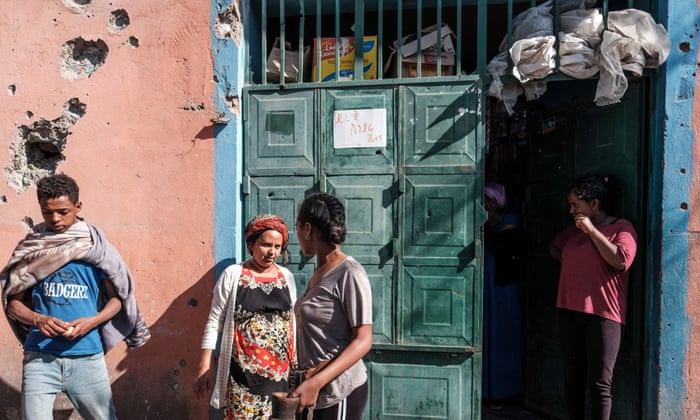 People stand outside a shop in Mekelle that was damaged in shelling when federal troops retook the town in November. Photograph: Eduardo Soteras/AFP/Getty Images

Massacres and other human rights abuses are motivating many young Tigrayans to take up arms, independent observers and TPFL officials told the Guardian.

Incidents include the killing of as many as 700 people at a famous religious site at Axum, and another 164 at Dengolat, a village in northern Tigray. Atrocities have also been attributed to Tigrayan forces. Hundreds of people died in a massacre blamed on a TPLF-linked militia at Mai Kadra in early November.

On Friday Human Rights Watch said the massacre in Axum occurred after Tigrayan militia members, joined by some residents, attacked Eritrean soldiers. The Eritreans called in reinforcements, then began searching for young men and boys, and executing them.

“The [Tigrayan] youth are very angry. Until recently, [the TPLF] couldn’t train or arm all of the volunteers that were coming to them … In recent days, they are telling them to come forward again,” said one TPLF administrative official who fled Tigray for a neighbouring province and is in touch with former colleagues there.

William Davison, an Ethiopia analyst with the International Crisis Group, said there were multiple accounts of young men joining the the military wing of the TPLF as news of atrocities spread. “There seems to be almost unanimous outrage … It’s very difficult to say how big the rebel force is now but all indicators suggests that manpower is not a problem,” he said.

The anger among Tigrayans has been reinforced by attacks on sites that have huge cultural importance in the province. The targeting of once-sacrosanct refuges has also pushed those fleeing violence to seek out TPLF-controlled zones, messages passed by local residents to relatives outside Tigray suggest.

Michelle Bachelet, the UN high commissioner for human rights, said on Thursday that her office had corroborated grave violations that could amount to war crimes and crimes against humanity in Tigray.

Most of the massacres reported so far occurred in November or December last year, but there is evidence that they continued into January. Between 150 and 300 young men are reported to have been killed in a village near Dela, south of Samre, during fighting about six weeks ago.

Though details of the incident are unclear, relatives of victims have contacted friends and sympathisers in Europe, telling them that after clashes with TPLF fighters, government soldiers rounded up men of fighting age and shot many in the fields. After Samre was retaken in mid-February, fires appear to have been deliberately set to destroy more than 500 structures close to the town.

There is also widespread concern about attacks on women and children, and ongoing sexual violence. Patients at Ayder referral hospital in Mekelle have included about 120 sexual violence survivors, some bringing reports of gang-rape by soldiers. “It is a plague on women. Our sisters are suffering,” said one medic working with survivors of rape who asked not to be named for fear of reprisals.

Eritrean officials have described allegations of massacres by their soldiers as “outrageous lies”. The Ethiopian government said on Wednesday that federal officials were investigating “credible allegations of atrocities and serious human rights abuse” and would ensure accountability.

“Ethiopia rejects any partisan interventions and politically motivated campaigns against the country and government, aimed at undermining the rule of law measures it has taken, and will continue to take in bringing the criminal clique and other perpetrators to justice,” the statement said.

Davison described the conflict as “probably unwinnable for either side”. “If people are going to put the pieces back together they need to find a way of starting a political process,” he said.