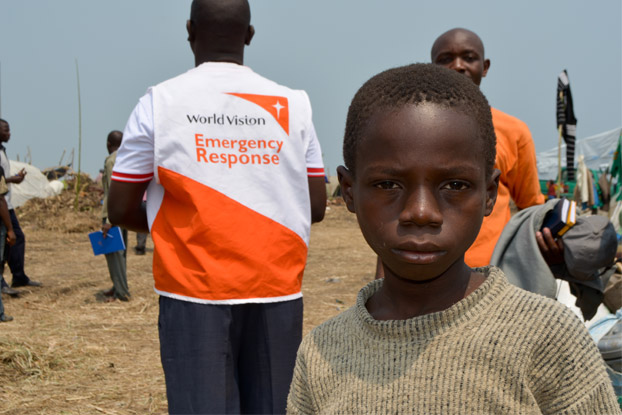 YAMBIO (HAN) September 9.2016. Public Diplomacy & Regional Security News. The staff of the World Vision International was shot dead together with his wife and two children by unknown gunmen last night in Yambio, Western Equatoria. Also injured was a pregnant woman in a separate house while the house of the Member of Parliament in the newly created controversial Gbudue State came under attack the same night.

Speaking to the media, a Crime Officer in Yambio county, First Lieutenant Emmanuel Fidel, said unknown gunmen stormed the house of late Silivinio Caciano and shot him with his wife Josephine Nako John and also killed two children in the other bed room at around 12:00am on Tuesday night.

“What happened last night at around 12:00 am is that unknown gunmen attacked the house of late Silivinio Casiano and killed him with his wife Josephina Nako John and their two children in a separate bed room,” he said.

Emmanuel added that it remained unclear as to what motive was behind the killings for the last one week as the attackers are not interested in properties but to kill. He said the same incident happened when a boda-boda [motorbike] rider was killed over the weekend in Yambio Freedom Square. A Medicines San frontier (MSF) driver who was also killed with his wife on Bazungua road and no property was taken.

Meanwhile, across Yambio town the house of a Member of Parliament in the newly created Gbudue State Legislative Assembly called Joseph Tindiri came under attack the same night where heavy gunshots were heard and hand grenade was exploded but nobody was injured and no property was stolen except destruction of some properties and vehicles.

Joseph said unidentified people were seen several times at late hours near his house, harassing people. He added that he however did not have any personal problem with anyone which could lead to some unknown gunmen targeting him.

“I will not go to exile, I am a South Sudanese and this is where I was born. I will not go anywhere because I have no problem with anyone I will stay in my house and God will protect me,” he said.

The Government of Gbudue State has launched an investigation into the killing of the aid worker with his family and the rampart increase in insecurity in Yambio town. No arrest has been made so far.

On Tuesday, the state government issued an order banning boda-boda business as from 9pm up to 6 am in the morning as efforts have been exerted to allow the security personnel to hunt the criminals who are targeting civilians and boda-boda riders on the road.

Citizens in Yambio continue to live in fear due to the increasing insecurity which has created panic among the people as no one knows when and how the unknown gunmen may attack.

Some counties in Western Equatoria experienced brutal killings from unknown gunmen which emerged when violent conflict erupted between armed youth and soldiers belonging to the South Sudanese army since last year.

The violence however briefly subsided with signing of a peace agreement between the youth fighters of the South Sudan National Liberation Movement in Gangura payam, but other armed youths remain in the bushes claiming to be under the opposition faction of SPLA-IO under the leadership of former First Vice President, Riek Machar. (ST)