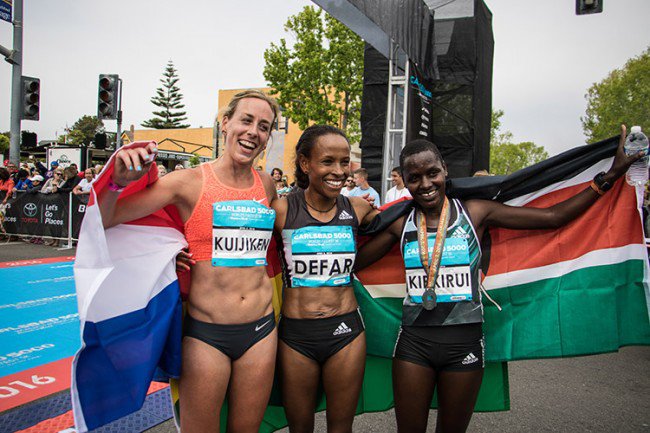 Carlsbad (HAN) April 4. 2016. Public Diplomacy & Regional Security News.In the women’s division, Ethiopia’s Meseret Defar will be the clear runner to beat. Defar, 32 years old, is arguably one of the best runners at the 5K distance ever, having won two Olympic gold medals in that distance on the track. The Ethiopian has dominated at Carlsbad three times. And in 2006, she set the still-standing fastest road 5K time in the world, 14:46. “I can’t believe 10 years have passed since I set the world record in Carlsbad,” Defar said. “A lot has happened to me on and off the track since then, but it remains a race which is close to my heart for many reasons”.

After her Olympic win in 2012, Defar took a hiatus from the sport to start a family. “Since the birth of our daughter Gabrielle last year I’m now back racing well and my indoor performances show me that I am ready to run well, run fast and hopefully post another quick time,” she said. “I’m excited for the rest of the year, I’m looking forward to Carlsbad as my next challenge before turning attention to the track and the Rio Olympics.”

Ethiopia’s famed rival, Kenya, will have athletes at the starting line on Sunday–most notably, the woman wearing bib F2, Caroline Kipkirui, who is a rising star in her country. The 21-year-old Kipkuri owns a 15:24 personal best for 5000m. Another Kenyan expected to give Defar a run for the money is former Florida State standout Violah Lagat who has run 15:35 for the 5000m and has been setting personal bests in the shorter distances (1500m and mile) this year, which might be indicative of speed for Sunday’s race.

The United States has two aces toeing the line: Alisha Williams of Golden, Colorado and Jen Rhines of Boston. Williams has a sub-15-minute personal best (14:58) and has shown versatility by running PRs in the 10,000m and the 10-mile last year. Jen Rhines is a three-time Olympian and set her PR in Carlsbad back in 2007 (15:21). She will be attempting to set a new U.S. Masters record (15:48) on the speedy and scenic course.

The Carlsbad 5000 is a signature Rock ‘n’ Roll event and isn’t limited to elites. In fact, the fun starts with the Junior Carlsbad pre-registration party on Friday. That next day, 1,500 young runners ages 12 and under will give it their best in 11 age-group races.

Sunday is all about the 5K as participants earn their finisher medal. Runners over 21 will have the opportunity to celebrate in style at the beer garden with some free brews thanks to Pizza Port. Live music, sunshine, cool ocean breeze, and plenty of on-course entertainment will make this year’s Carlsbad 5000m the race to be at this weekend.