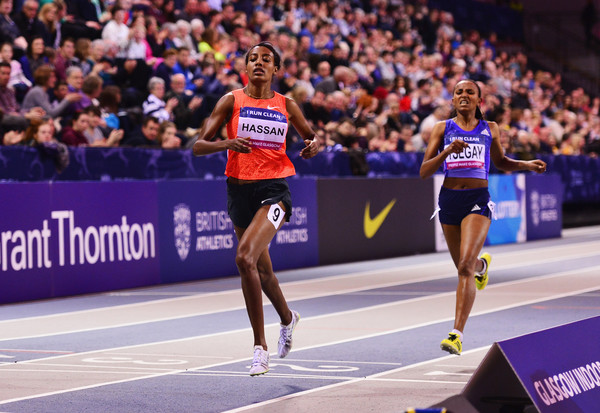 With Dawit Seyaum a late scratch from the women’s 1500m, one might have thought the race would be a contest between Sifan Hassan and the clock but the Dutchwoman was tracked all the way by another up-and-coming Ethiopian.

Hassan was keen to run fast in her first race since coming back from South Africa where she has been training in the off-season and she was on sub-four minute pace with the clock showing 2:58 with two laps to go.

However, she was probably not expecting Gudaf Tsegay to be on her tail at this stage of the race.

Running from the front, Hassan opened up a small but decisive gap on the battling Ethiopian teenager for victory in 4:01.40.

“I plan to do some 800m races next and then head to the World Indoor Championships in Portland. After that, the focus will be on the Olympics in Rio,” commented Hassan.

Tsegay’s time was also notable: her mark of 4:01.81 was an outright lifetime best and a world junior indoor record * by over one second, the previous best being by Kalkidan Gezahegne who clocked 4:03.28 in 2010.