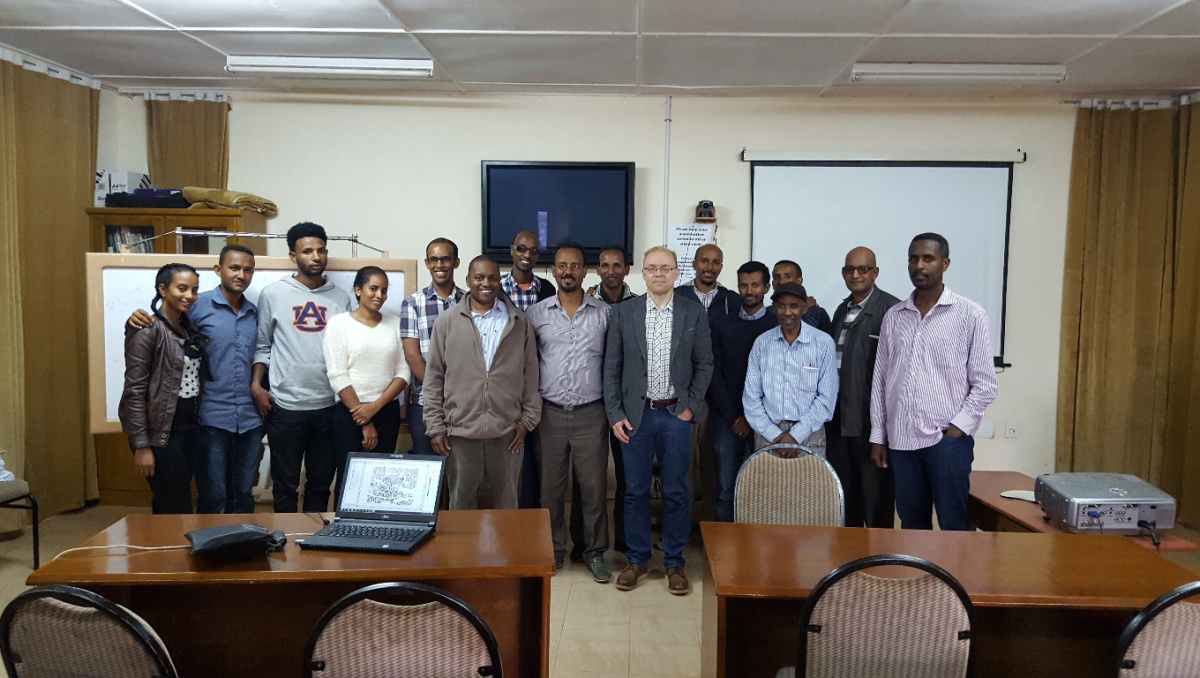 Share on Facebook
Tweet on Twitter
his is a blog post by Edward Mutafungwa of Aalto University who was travelling to Eritrea in August 2016 as part of the ICT4EEDU project.
Me and my Aalto University colleague, Prof. Jyri Hämäläinen, embarked on a capacity building journey to Eritrea on Saturday 6th August 2016. Our mission was part of the ICT4EEDU project and the main objective was to conduct a training course on Advanced Wireless Technologies and network planning workshop. The African continent in general has undergone a ‘mobile revolution’ within the last decade and half, and Africa remains the fastest growing market in terms of mobile subscriptions (including mobile data subscriptions). So it is against this exciting backdrop that we travel to Eritrea and our hosts from the Eritrean Institute of Technology (EIT) have assured us that there is great anticipation at EIT for this course.
My prior knowledge of Eritrea was very limited. It was mostly informed from what I read on the web and in discussions with Aalto colleagues hailing from neighbouring countries in the part of Africa. At the point of departure in Helsinki Vantaa airport, the immigration official serving me was curious upon seeing my final destination (Asmara) and asked me “what is the population of Eritrea?” The fact that I did not even have an educated guess on this question indicated to me how much I still needed to learn about my next destination.
The Turkish Arline flight was smooth (via Istanbul and Taif in Saud Arabia) and our landing at Asmara on second attempt (due to thick fog) was greeted with cheers by most of the passengers. The temperature in Asmara on arrival in the early hours of the morning was cooler than Helsinki, this was a welcome surprise, particularly for Jyri who resides in the colder Northern Finland. As is usually the case on arriving in new countries we immediately took our smartphones from flight-mode and picked up a strong mobile signal, but this time no network service. We later understood that the national mobile operator, Eritel, did not yet have mobile roaming agreements with Finnish operators.
The first day (Sunday 7th) gave us an opportunity to get acquainted with our new surroundings. The walk along the palm-tree lined Liberty Avenue was particularly relaxing. That same afternoon we met our hosts from EIT (Samuel and Rediet), and we managed to go through the plan for the course and workshop over a cup of coffee prepared in a traditional Eritrean coffee ceremony. The rest of the evening was spent in the hotel preparing for the week’s activities while struggling to read emails over a very slow hotel Wi-Fi Internet connection.
On Monday morning (8th August) we travelled to the course venue at the EIT campus located about 20km outside Asmara. We were welcomed by 16 keen participants to the course, constituting staff of the ICT unit of EIT and some technical staff from Eritel. The course kicked off with lectures by Jyri, with a focus on third generation (3G) mobile networks. This direction of the lecture was inspired by the fact Eritel is in the process of completing the deployment of 3G networks in the country. This is indeed is timely as it would bring badly needed mobile Internet connectivity to Eritrea and the related local innovations in mobile apps. The current Internet access at EIT using satellite (VSAT) technologies is both costly and limited in capacity for the campus user base. Therefore the lectures on 3G at EIT were timely and stimulated discussions on the capabilities and opportunities of the new mobile networks being rolled out in the country.
The lectures continued on Tuesday and the evening ended on a high note with the EIT team hosting me and Jyri at restaurant for traditional Eritrean food. This restaurant was particularly special as it also resembled a museum with many historical photographs and cultural artifacts of Eritrea. This was a true learning experience for us in more than just culinary terms. The final lectures where then held on Wednesday 10th August, with the focus shifting from 3G to 4G networks. This created further interest but also a pragmatic discussion on the necessary prerequisites for the upgrade to those future mobile networks. Eritrea still depends on satellite links for its connection to the global Internet. This limited and costly option will of course present a challenge when rolling out future mobile networks.
On Thursday and Friday, the course switched from lectures to network planning workshops. The participants got hands-on experience of planning mobile networks with a computer-aided network planning tool. This group work was enjoyable and a nice complement to the lectures of the previous days. We were also fortunate to be in Eritrea during the Festival Eritrea as part of the 25 years celebration of independence. On Thursday we attended the festival at Asmara Expo. What a wonderful showcase of the cultural diversity of Eritrea, local ingenuity and of course the exciting camel rides.
The course and training workshop ended on Friday with good moments of reflection with the course participants. Personally, this trip was a valuable and unique learning experience, which goes beyond what one could learn from the web, news articles and so on. I take with me memories of a people with a sense of duty, such as, the youthful scouts I saw volunteering for traffic duties and at the national festival. Valuable lessons have also been picked in moments of tragedy on the final day of our training. The EIT staff shuttle bus we were travelling in on that day was involved in an accident at a village several kilometers away from EIT and a young boy from the village lost his life. This moment of significant grief, was also notable for the great compassion, discipline and solidarity shown between the EIT staff, villagers and all that witness this unfortunate incident. All in all, I very much look forward to the next time I visit Eritrea.