Home frontpage WHY OROMO PROTESTS ISN’T JUST A PROTEST AGAINST A ‘MASTER PLAN’? 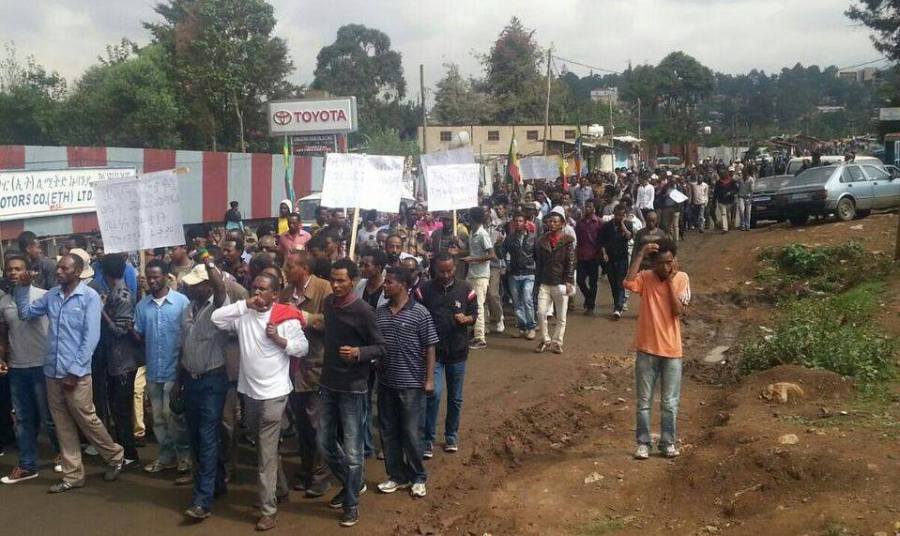 NAIROBI (HAN) February 10, 2016 – Public Diplomacy and Regional Stability Initiatives News. In mid-April 2014 senior officials from the Oromiya Special Zone were the first ones to have publicly resisted the Addis Abeba and Surrounding Oromiya Special Zone Integrated Development Plan (AASOSZIDP), popularly known by its misnomer ‘Master Plan’. Subsequently hundreds of thousands of university students and residents in various cities of the Oromiya Regional State took to the streets to protest the ‘Master Plan’after a program on the discussion was first aired on TV Oromiya. The government’s immediate response was to crackdown the protest using excessive force; but that left providing a lasting solution untouched. One and half year later on November 12th protestors were back on the streets again and spread through many more towns involving different segments of the population. The result is no different than was in 2014; more bloodshed, deaths and destruction the extent of which is still unknown.

In this article, I will argue why the fresh protests are no longer about a resistance to the so called ‘Master Plan’but a resistance against economic, socio-cultural and political marginalisation of the ethnic Oromos in and around Addis Abeba and beyond.

The massive urban expansion in Addis Abeba, as well as its surrounding, has resulted in the displacement of thousands of Oromo farmers with authorities showing little attention or attempt to restore their livelihood. Addis Abeba, Finfinne, as the Oromos call it, is not only home to the Oromo farmers around it’s space that has a significant political and cultural importance to their being.

It’s amidst this continued displacement of these Oromo farmers and the erosion of their cultural heritage that the proposed ‘Master Plan’ to coordinate the development plan of the capital with the surrounding Oromiya Special Zones came to the picture.

Early establishment and the growth of Addis Abeba

Since the establishment of the city in the late ninetieth century, the Oromo farmers, who are indigenous people of the area, have seen massive displacements to make way to new settlers. Emper or Menelik II started confiscating the land that belonged to the indigenous Oromo community and distributed huge chunks of it to his dignitaries, who were mostly non-Oromos. The servants of the dignitaries had surrounded their masters’ houses, which led to the creation of “sefers”, neighbourhoods, in the city. The then ruling elite started inviting co-ethnics and shaped the city to cater their administrative, economic and socio-cultural needs by pushing away indigenous Oromo community from their ancestral land. However, many mainstream historians narrate the story of Addis Abeba as starting from Tayitu’s discovery of the “FilWuha”, the hot spring area currently behind the Sheraton Addis Hotel, as if the area was previously a pure jungle or a tabula rasa. The Haile Selassie regime also continued with the land dispossession of the Menelik era. By 1966, only 5% of the population of Addis Abeba controlled 95% of the total land mass in the jurisdiction.

Despite the nationalization of land in 1975, the dispossession of land from Oromo farmers continued unabated throughout the military Derg regime. According to a 2011 research paper by Feyera Abdissa and Terefe Degefa, the Derg expanded the jurisdiction of Addis Abeba by two-fold from 22,204 ha, to 53,021 ha, mainly to pave ways for housing cooperatives. 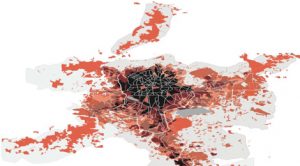 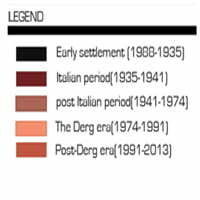 The expansion of the city since its establishment

The capital and its hinterland since 1991

After the falloff the Derg and during the establishment of the transitional government in early ‘90s, the current government, Ethiopian People’s Revolutionary Democratic Front (EPRDF), made a minor concession to the demand of the then rebel group, Oromo Liberation Front (OLF),and included a provision that guaranteed “the special national and political interests of the Oromo…” in Addis Abeba; it was stated so in the Proclamation to Provide National/Regional Self-Governments Establishment (Transitional Government of Ethiopia, TGE, (Proclamation No. 7/1992). The 1995 constitution maintained this provision but left the details to be specified in the future. Nevertheless, the law that specified the interests of the Oromiya National Regional State (NRS) in Addis Abeba failed to materialize as of yet. In the meantime, the expansion of the city towards the surrounding hinterland continued exponentially during the current regime. Although the municipal boundary did not change since 1994,the boundary of the Addis Abeba City Administration and the Oromiya NRS has never been demarcated in the ground. Due to this, there are officials from the Oromiya NRS who repeatedly complain of the unlawful intrusion by the Addis Abeba City Administration.

During the first decade (between 1991 and 2001) of EPRDF, the expansion of the built-up area of the city was limited due mainly to the focus on Agricultural Development-Led Industrialisation (ADLI), a development strategy of the government. However, ADLI partially succeeded in improving agricultural productivity, which not only failed to take off but also had less demand due to weak purchasing power of urban consumers.

In the backdrop of that since 2001EPRDF’s focus began to shift to urban areas as well as to build a power base in cities, which they lacked before. To this end the late prime minister appointed the then mayor of Addis Abeba, Arkebe Oqbay, in 2003to facilitate infrastructural development and create a conducive environment for the private sector. Arkebe’s administration engaged in low-cost housing construction, transfer of land to real estate developers and other investors at extremely cheap lease prices through dispossessing Oromo farmers. This practice intensified during the post 2005 election crisis as the city administration used Addis Abeba’s land to reward its loyal supporters. The Addis Abeba caretaker administration, which was assigned by the late prime minister after the Coalition for Unity and Democracy (CUD) failed to administer the city, a city it won in a landslide victory during the 2005 election, continued transferring land to urban elites through displacing Oromo farmers from their land.

Meanwhile since EPRDF’s 2005 election defeat in urban areas, the East Asian developmental states economic model, which already started surfacing in 2001, became its official party development path. During the ‘60s and ‘70s these states, particularly Taiwan and South Korea, were known for their massive investment programs in urban areas to foster industrialization while exploiting the rural agrarian society.

Ethiopia’s EPRDF led government, following the footsteps of these states, as well as using the legal technicalities of its ownership of land to its advantage, engaged in the massive dispossession of Oromo land surrounding Addis Abeba in the name of making room for local and foreign investors. Huge chunks of lands were transferred to foreign flower farms, local manufacturing industries and real estate developers. Most of the land transfers were ordered by the federal government while the role of Oromiya National Regional State was limited to executing the transfer. Its officials were even incapacitated to regulate the working conditions and environmental impacts of these investments.

All these dispossession of Oromo farming community from Addis Abeba and its hinterlands have brought in three interrelated negative consequences: economic, socio-cultural and political, to those displaced as well as the whole Oromo population.

Economically, the dispossession of land from Oromo farmers without sufficient compensation and institutional support has resulted in impoverishing the farming households. Due to the public ownership of land, farmers, whose land was expropriated for “public interest”, received a meagre amount of compensation. In addition, there is no institutional support that assists the displaced farmers to make a transition from agricultural based to urban-based means of livelihood. A huge number of farmers located within and around the capital were hit hard; many of them have become beggars, low paid labourers in their own land and were forced to migrate to other localities.

Socio-culturally, since the establishment of Addis Abeba the natural space of the Oromo has been diminishing by giving way to socio-cultural norms that are alien to the indigenous Oromo community.

Third, the displacement of Oromo farmers together with the consequent socio-economic impoverishment as well as socio-cultural violence has marginalized the Oromos politically.In the turn of the twentieth century, the Oromos were the largest ethnic group in Addis Abeba. However, according to a census conducted a century later by Ethiopia’s Central Statistic Agency (CSA), the Oromos become slightly less than one-fifth of the city’s population. Due to this and their weak economic capacity, mainly owing to the decades old dispossession of their land and the current political order the Oromos were left with little to no say in the administrative affairs of the city.

It is in this context that the now controversial and deadly ‘Master Plan’ came about. Although the plan itself doesn’t seem to entail a clear expansion of the municipal boundary of Addis Abeba, it clearly caters the needs of the capital by providing land for a landfill and waste treatment sites, among others, and has provisions that help the wealth accumulation by the few through dispossessing countless Oromo farmers.

In a knee jerk reaction to the extraordinary protests that engulfed the Oromiya Regional state, the federal government pledged to suspend the ‘Master Plan’ until it gets public consent. But the fact that the ‘Master Plan’ falls short of officially expanding the city boundary of Addis or that the federal government claimed to have suspended it will not stop the spatial (if not boundary) expansion of the city, which is partially what lies behind the enduring Oromo protest.