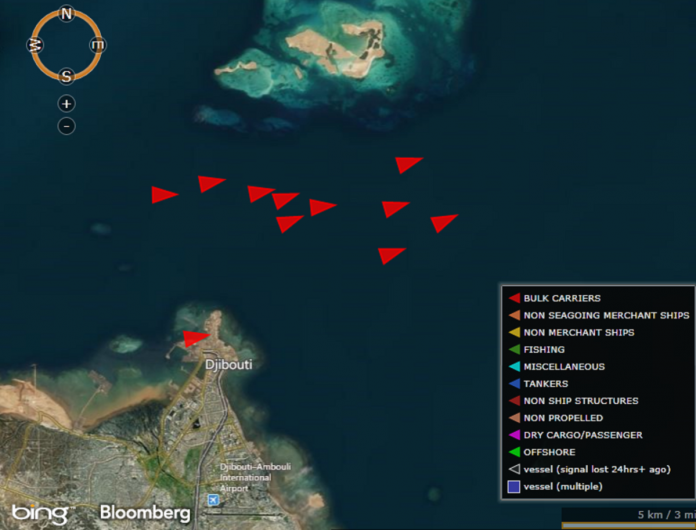 Ethiopia is doubling its wheat purchases after the harshest drought in half a century, causing bottlenecks of ships at the country’s main port in neighboring Djibouti. At least 10 vessels are waiting to unload about 450,000 metric tons of wheat, according to information on the port’s website and ship-tracking data on Bloomberg. One carrying 50,000 tons of wheat and sorghum is berthed.

“There’s a whole bunch of ships that are lined up,” John Graham, the Ethiopia director for Save the Children, said by phone from Dire Dawa on Tuesday. “The numbers of berths allocated is not adequate so far.”

Ethiopia, sub-Saharan Africa’s biggest wheat consumer, is grappling with a growing food problem as the lack of rain erodes harvests of everything from sorghum to wheat, forcing the country to launch international tenders. Droughts in the country have become more frequent and severe in the past decade, and the effects from El Nino weather patterns have wreaked havoc across many parts of Africa.

It takes about 40 days to unload ships carrying grain, which is used to feed people in Ethiopia’s urban centers, according to Save the Children. In total, it can take around 120 days to purchase and transport food into the country through Djibouti, the British charity said in a February report.

In Ethiopia, among the world’s poorest countries, the number of people living with hunger has more than doubled since August to more than 10 million, according to the United Nations Food & Agriculture Organization. The number is higher when you add the 7.9 million supported by a government safety-net program. There are expected to be at least 450,000 severely malnourished Ethiopians this year, according to Save the Children.

In October, Ethiopia sought 1 million tons of wheat, more than it bought last season, according to estimates by the U.S. Department of Agriculture. Another tender for almost 500,000 tons will close on Friday.

“Of course it is congested,” Mitiku Kassa, who heads Ethiopia’s disaster relief agency, said by phone on Tuesday, adding that each berth at the port has the capacity to unload around 3,000 tons of grain a day. “However, fertilizer and wheat have been given due priority.”

The Carly Manx vessel, scheduled to arrive at the port on Feb. 22, is only now berthed. The Ince Beylerbeyi, initially set to reach the port on Feb. 19, is still waiting to unload 54,250 tons of wheat.

Further purchases in the tender may add to long waiting times at the port of Djibouti, which land-locked Ethiopia uses to bring in supplies. Imports will jump to 2.5 million tons in the season ending in September, up from 900,000 tons a year earlier, the USDA estimates.

The government is adding trucks, and building distribution points and temporary warehouses to meet monthly food delivery targets, Mitiku said. The operation is also being delayed by regular government assessments of who the most needy are, Save the Children’s Graham said.

“There has been a slow start to food deliveries this year,” Graham said. “We still need to prepare for a spike in severe malnutrition.”