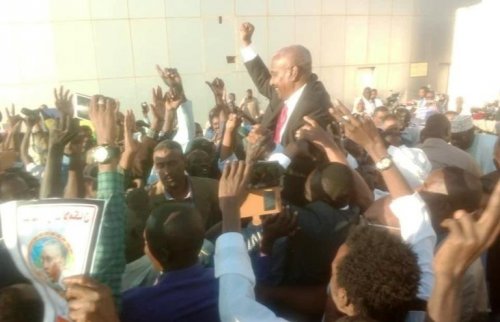 December 2, 2019 (KHARTOUM) – Yasir Aram the deputy chairman of the SPLM-N Agar Monday said they came to Khartoum to reaffirm their support for the transitional government and their readiness for a peace establishing a state based on equal citizenship.

Arman and his accompanying delegation arrived at Khartoum airport on Monday and were welcomed by Mohamed al-Faki, a member of the Transitional Sovereignty Council and a number of Sudanese Revolutionary Front (SRF) leaders already in Khartoum.

The delegation was also greeted by SPLM-N Agar supporters who gathered at the airport to receive them and celebrate their return to the country after being deported from the country last June.

Speaking in a press conference a Khartoum hosted by the official news agency SUNA, he reiterated their support for the civilian transitional government headed by Abdallah Hamdok and stressed their commitment to the partnership with other Forces for Freedom and Change (FFC) to build a unified democratic Sudan.

“We came to preach peace as we have been able in Juba to create a new partnership with the Transitional Authority represented by the Sovereign Council and the Council of Ministers”.

“We stress the importance of continuing this partnership to achieve peace”.

Also, the political leader stressed that the war will end only by recognizing equal citizenship without discrimination for all Sudanese and stopping discrimination against women.

“In a country like Sudan, it cannot rise to a new national project unless it recognizes citizenship without discrimination,” he said.

He said that their visit to Khartoum a week before the resumption of talks in Juba aimed at preaching peace and pushing the country to move to a new stage before to stress the importance of joint action to preserve Sudan’s integrity.

“We can establish a confederation that can be open to include other neighbouring countries,” he said.

For his part, Ismail Jalab, the SPLM-N Agar Secretary-General, called on the other faction of the SPLM-N led by Abdel Aziz al-Hilu to reunite the Movement and coordinate with them to achieve peace in the Two Areas and the rest of Sudan.

In the same trend, he called on the exiled holdout rebel leader Abed Wahid al-Nur to join the peace process in Juba, pointing that the process is open for all the parties.

“We need to work to end the war, return the displaced and refugees to their areas of origin,” he said. He added that both are the most affected social segments by the war.

The peace talks will resume on 10 December.

The government negotiating delegation held a meeting on Monday to prepare for the talks.