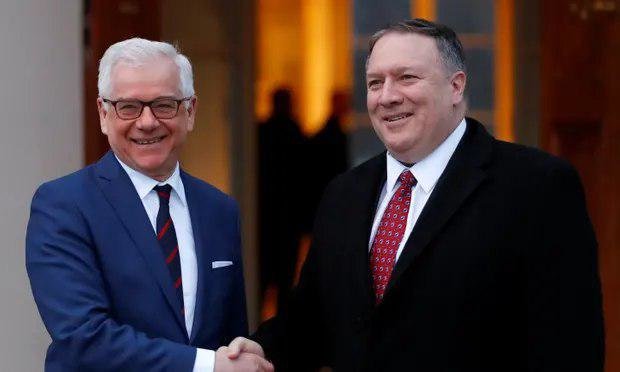 Warsaw, Poland – A United States-led two-day summit on “peace and security” in the Middle East started on Wednesday – a gathering denounced by uninvited Iran as “dead on arrival”.

The meeting was first announced last month by US Secretary of State Mike Pompeo after his strongly worded anti-Iran speech in Cairo and has been widely perceived as an effort to rally world powers behind Washington’s vision against Tehran.

But the conference comes at a sensitive moment as the European Union is trying to prop up JCPOA, the 2015 nuclear deal which was signed to prevent Tehran from building nuclear weapons in exchange for sanctions relief. The US withdrew from the deal after President Donald Trump’s May 2018 decision.

Here are five things to know about the Warsaw summit, which has a cumbersome official title: Ministerial to Promote a Future of Peace and Security in the Middle East.

What’s the summit about and who’s attending?

After a lukewarm reception by invited parties, the angle of the conference focused on broader subjects of security in the region.

Poland has been resisting the urge to turn the summit into a propagandistic anti-Iranian meeting, underscoring its commitment to JCPOA, but as Poland’s former ambassador to Afghanistan Piotr Lukasiewicz told Al Jazeera: “[Poland] has lost control over the general message of the conference to the US, Israel and Saudi Arabia.”

It is still unclear exactly who will attend, but Tehran officials are missing from the guest list; the meeting was planned by Brian Hook, Trump’s special envoy on Iran and head of the Iran action group.

Israeli Prime Minister Benjamin Netanyahu is expected to speak to US Vice President Mike Pence, who will address the conference, with Pompeo in attendance.

Trump’s son-in-law and adviser, Jared Kushner, is expected to make a rare speaking appearance on Thursday.

British Foreign Secretary Jeremy Hunt will be there but has said he primarily wants to address the humanitarian crisis in Yemen – a war which his country is involved in.

Other European countries will send lower-level delegates and some Arab countries are sending delegations led by ministers.

Who won’t be there?

Chief EU diplomat Federica Mogherini said she would not attend

Lebanese Foreign Minister Gebran Bassil announced on Monday that he would not attend the summit, as well as Palestinian officials who have dubbed the conference a US-Israeli “conspiracy aimed at eliminating the Palestinian cause”.

The conference comes as the US starts its policy of disengagement in the region. Trump announced in December last year the withdrawal of US troops from Syria.

Warsaw represents the first attempt by the Trump administration to build a coalition.

The stakes are high, according to Lukasiewicz, because the outcome might help determine who will fill Washington’s role.

“The US has chosen Israel as its ally long time ago. Saudi Arabia seems to be another intercessor of American interests in the region,” he said. “The Palestinian issue seems to become a silent victim of the unofficial rapprochement between Saudi Arabia and Israel against Iran”.

The meeting in Warsaw could be the first of many, said Patrycja Sasnal from the Polish Institute of Foreign Affairs.

“The US wants to create a forum where Israel and the Sunni Arab countries meet, given that they have not established diplomatic relations yet,” she said. “For the US, the summit is an alternative to JCPOA that is supposed to put more pressure on Iran and force it back to the negotiation table, this time regarding its regional policy and missile programme.”

It seems that this is what Iran fears too.

Critics in Tehran argue that European countries should have shown a stronger stance against US policy.

“Even though some EU countries will send lower-level diplomats, their flag is going to be there. We expect the EU to be criticising US and holding a summit to analyse US foreign policy in the region, rather than participating in a conference geared to attack Iran,” said Foad Izadi, professor of international studies at Tehran University.

Where do Europe and Poland stand?

The rejection of the summit by some Europeans “reflects that although EU countries have problems with Iran’s regional behaviour, they don’t believe how the US is addressing this problem is constructive for security and stability in the region.” said Ellie Geranmayeh, senior policy fellow at the European Council on Foreign Relations.

Poland’s decision to host the event highlights a wedge between EU countries, according to Ali Fathollah-Nejad, visiting fellow at the Brookings Doha Center. “Not all member-states align with what the E3 (Germany, UK and France) are aiming for,” he said.

It is a multilateral forum and Europe can demand the inclusion of Iran in further rounds of talks. Any viable architecture of peace and stability in the region has to include Iran anyway.

PATRYCJA SASNAL FROM THE POLISH INSTITUTE OF FOREIGN AFFAIRS

Even if all EU countries shared the same position on the nuclear agreement, “the overall mood in Europe vis-a-vis Iran has become more critical, given Iranian assassination attempts that took place on EU soil as well as Iran’s ballistic missiles that could reach Eastern Europe.”

The timing of the Warsaw summit could suggest that the US is aware of the friction within Europe over Iran, and is eager to deepen the gap.

The fact Warsaw is the host could be centred on security concerns; Poland is trying to establish a permanent US military presence to counter Russia’s regional ambitions.

While the US seems determined to use Warsaw to expand its anti-Iran coalition beyond Israel, Saudi Arabia and the United Arab Emirates, experts doubt Washington will succeed.

“There won’t be a tangible outcome with a statement that isolate[s] Iran,” said Geranmayeh. “European countries are going to be very cautious on what statement they will sign or to join any conclusion that point[s] fingers on Iran.”

According to Sasnal, a lot depends on who is going to participate in the event. The attendance of states without hostile relations with Iran would soften the general message of the conference.

European states could use this opportunity to exert pressure on Iran while keeping the JCPOA alive. “But for this, Europe has to present a unified front,” Sasnal said.

The summit could also be used to tamp down Washington’s anti-Iran position.

“It is a multilateral forum and Europe can demand the inclusion of Iran in further rounds of talks,” said Sasnal. “Any viable architecture of peace and stability in the region has to include Iran anyway.”