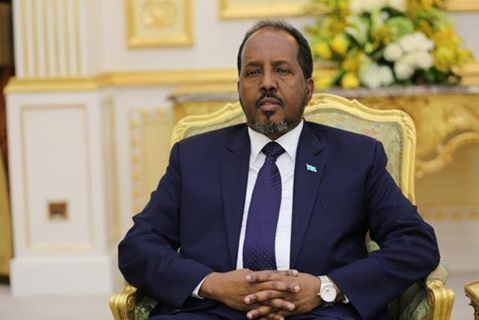 WASHINGTON (HAN) September 3.2016. Public Diplomacy & Regional Security News. Somalia’s president, Hassan Sheikh Mohamoud, answered questions about terrorism and the Somali diaspora in a town hall hosted by VOA’s Somali Service. The program is the first of its kind to connect Mogadishu, the capital city of Somalia, with Saint Paul City, in Minnesota, home to the largest Somali community in the United States.

Both venues hosted crowds of Somali youth who asked the president questions on extremism, unemployment and education. The town hall was streamed live over the VOA Somali Facebook page.

When asked whether the government’s policies have failed to protect Somalis, the president staunchly said no – citing terrorist attacks around the world to prove that such violence can happen anywhere.

“I do not believe that our policy has failed,” he said, referencing “an extraordinary level of insecurity” around the world.

“Things that are happening in Mogadishu happen in Paris, Turkey, and other major cities in the world…we did our best,” he said.

One Minneapolis resident, Ayduruus Ahmed Abdirahman, a teenager starting high school this fall, asked the president in English how he would make the country safer so that kids such as himself would be able to return to his parents’ homeland for vacations.

“We’re tired of going to Ohio or Seattle for vacations when we have so many beautiful cities back home, but we hear about things blowing up there every day,” Ahmed said. “How can you convince our parents that want to bring us home for vacations that safety isn’t a concern?”

The boy’s question was met with applause, and the president answered that though the country faces insecurity and is at war with terrorists, “you can come back to Mogadishu – nothing will happen to you.”

Somalia’s ongoing civil war has displaced thousands of people and crippled its economy. The government continues to struggle to end attacks by the al-Qaida affiliated terrorist group al-Shabab. Observers say some Somalis turn to extremist groups because they face difficulties in finding jobs.

In Minnesota, men and women with ties to the Twin Cities have traveled to Syria to fight for the Islamic State terror group. Another dozen or so have tried to travel there before authorities intercepted them. Since 2007, at least 23 young men from the twin cities have left for Somalia, allegedly to take up arms and join al-Shabab, a ruthless and radical Islamic militia vying to topple Somalia’s U.S.-recognized government.

But Hodan Hello, a psychotherapist in Saint Paul, Minnesota, and a panelist at the Town Hall, stressed that many positive things are happening in the community as well.

“We do not have only negative things,” she said. “We have successful young people who are lawyers, doctors, and some who joined politicians. Extremism and crime are only a tiny part of our major challenges as a community.”

The town hall meeting was being aired live on Somali National Television and broadcast on Radio Mogadishu, Kulmiye Radio, and other stations throughout the region.

In addition to hosting such town halls, VOA Somali produces programming for Somalia’s youth. Just recently, the service began a 30-minute daily radio program for young listeners, providing a new platform for exploring social issues and getting the latest news along with music and technology features.