Home Ethiopia Violence in Ethiopia, Instability, and the Need for Law and Order 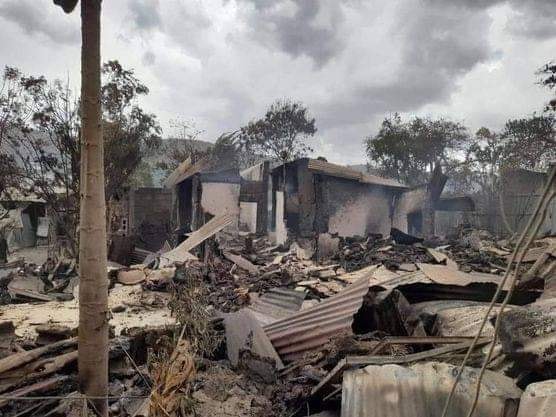 ADDIS ABABA (HAN) May 1. 2021. Public Diplomacy and Regional Stability Initiatives News. Monitoring Regional Issues. OPINION by Graham Peebles. An unresolved war in the north of the country; ethnic based violence some are describing as genocide in the West; random explosions of aggression in various regions: Ethiopia is trembling.

With around 117 million people, Ethiopia has the second largest population in Africa, made up of 80 or so tribal groups, all with their own cultures, language or dialect. Three big ones dominate: The Oromo (35% of population), Amhara (27%) and Tigrayan (6%). Historic disputes over land and power exist between these powerful groups; grievances which are being aggravated by pernicious elements attempting to destabilize the country.

On November 5th 2020 an armed conflict erupted in the Tigray region, between the federal government and the armed wing of the Tigray Peoples Liberation Front (TPLF). It had been brewing for some time and both sides were prepared, itching for a fight. The Ethiopian government invited Eritrean troops to the party and then denied they were fighting side by side against a common enemy — the TPLF, widely hated in Eritrea and by many Ethiopians.

Tens of thousands of civilians have been displaced (Ethiopia has around two million IDP’s) by the fighting, combatants on both sides killed, civilians (nobody knows how many) massacred and injured. Women and girls raped and tortured, reportedly by Eritrean military — thugs, committing vile acts, destroying lives, and all with impunity.

The government has claimed victory, but sporadic fighting continues and the TPLF leadership has escaped capture. They are believed to be reorganizing and recruiting young men to join what is morphing into an insurgency force. Intransigence prevails, with neither side willing to back down; the government is refusing to enter into negotiations, something that in the long-term, and given the high level of popular support for the TPLF in the region (they were elected as the regional government in banned elections in October 2020), may well be needed.

A UN investigation into atrocities in Tigray and elsewhere in the country is urgently required, but to date this has been rejected by the Ethiopian government who, it seems, want to appear to be in control; access to the region, which was shut off  by the government during the conflict, remains limited.

Tigray does not exist in isolation, Ethiopia is one state. Violence legitimizes and breeds violence and in an atmosphere of uncertainty, where law and order is weak it can quickly spread. Attacks are being committed mainly in the west of the country, but in other areas as well, against the Amhara people, by ‘rebels’; code for the Oromo Liberation Army (OLA) — a breakaway armed wing of the Oromo Libration Front (OLF), founded in the 1970s to fight for the self-determination of ethnic Oromo.

The ethnically based killings, destruction of property, rapes and displacement of persons constitute what some Ethiopians claim is genocide. This is reinforced by Genocide Watch, who have issued a Genocide warning “for Ethiopia due to the government’s inaction to stop ethnically motivated violence between Oromo, Amhara, Tigrayan and Gedeo peoples.”

The situation throughout the country is unstable and complex; ethnic identities are strong and long-standing differences between groups are easily inflamed by malicious forces, inside and outside Ethiopia. There is speculation that Egypt (angry with Ethiopia over the construction and control of the Renaissance Dam) is supporting the OLA with arms, and that the ‘rebel’ group is working with the TPLF, with the aim of destabilizing the country ahead of general elections in June. Elections postponed from 2020 that the incumbent party (the newly formed Prosperity Party) under the leadership of Prime Minister Abiy Ahmed, are expected to win.

Defeating the men of hate and violence

For generations Ethiopia has been governed by intolerant repressive dictatorships that have ignored human rights and ruled through fear. The current government came to power in 2018 on the back of years of widespread protests against the TPLF, it has opened up the country and aspires to be democratic. Prime-Minister Abiy is the first Oromia PM, and the cabinet (50/50 male and female) is populated largely by other people from Oromo.

The TPLF ruled from 1991 to 2018. Dismantling 27 years of corrupt governance, purging all areas of government, national and local, the police and armed forces, of TPLF personnel, or TPLF-influenced/sympathetic personnel; changing habitual methods and attitudes, will not be eradicated in a few years. Such far reaching change takes time. Some Ethiopians claim that little or not enough has changed in the last two years, and blame the government, or elements within the government apparatus, for the current unstable situation.

A cornerstone of the TPLF’s rule was ethnic federalism; a seemingly liberal policy, that promised to respect different cultures and honor aspirations for autonomy, but a divisive tool in the hands of the TPLF, employed to agitate conflict between ethnic groups, divide and rule being the objective. The aftermath of their abhorrent reign is community carnage, pent-up anger, corruption and distrust.

Like all such regimes, they ruled through fear and division and were widely despised in the country and among the Ethiopian diaspora, but to their utter shame, western nations, including Ethiopia’s primary donors (and therefore the countries with the greatest influence) the US, Britain and the European Union, supported them. Consecutive western leaders, most notably Tony Blair and Barack Obama, not only failed to call out the regime’s atrocities, but were complicit, hailing corrupt elections as fair, legitimizing the results of one stolen election after another. And now, when Ethiopia is being assailed by criminal gangs, domestic terrorists masquerading as ‘freedom fighters’, and many believe, foreign interference, they stand by and do nothing.

With the odd exception, the mainstream media is also largely silent; uninterested it appears, in the deaths, rapes, and abuse of Ethiopians – men women and children whose lives were riddled with difficulties even before the current violence exploded. And now, as a result of a number of factors, including the fighting, the International Rescue Committee (IRC) states that, “Ethiopia is second only to Yemen for the total number of people in need in 2021 (IRC estimates at least 21 million). As the year progresses, vulnerable communities will increasingly struggle to access necessary food and resources.”

In order to support vulnerable communities and deal with the dire humanitarian and social issues facing the country, there must first of all be peace and stability.

The safety of civilians is the first requirement of any government, and in this major respect the ruling party under PM Abiy Ahmed, has completely failed. Enforcement of the law must be a priority, police and security forces need to be strengthened, deployed to areas where communities are at risk; corruption weeded out of all areas of public life. And every effort made, by politicians, religious leaders and the media, to unify the country. Talk of unity is easy, commonplace, but without justice, tolerance and understanding, it is a hollow word that means nothing.

Ethiopia is a diverse whole; ethnic differences and culture divergence enrich the country and should be respected and celebrated. For generations people from different ethnic groups have lived side by side; marrying, praying and working together. Community harmony is being poisoned by power hungry men intent on sewing unrest and wreaking chaos. These divisive forces, wherever they may be (and some will be found hiding within government bodies), must be rooted out of the country, and those responsible for the horrendous killings, rapes and destruction hunted down and arrested, tried in a court of law.

To move this wonderful country, which has suffered so much, out of the suppressive violent shadow of the past is no easy task; time is needed, solidarity and patient perseverance. But throughout the World and within Ethiopia, there is a powerful movement towards justice and freedom, a movement that despite the best efforts of the men of hate and violence, must prevail.

Graham Peebles is an independent writer and charity worker. He set up The Create Trust in 2005 and has run education projects in India, Sri Lanka, Palestine and Ethiopia where he lived for two years working with street children, under 18 commercial sex workers, and conducting teacher training programmes. He lives and works in London.