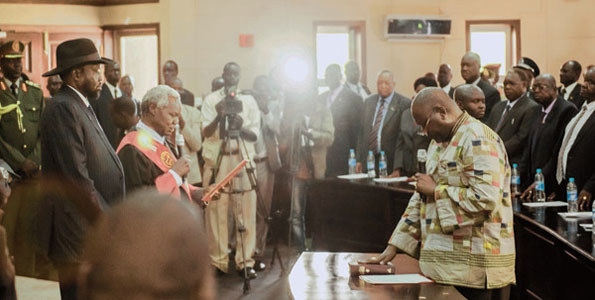 WASHINGTON (HAN) April 30. 2016. Public Diplomacy & Regional Security News. The United States is prepared to consider imposing sanctions or an arms embargo on South Sudan’s leaders if they fail to cooperate in a proposed unity government to end conflict in the country, a senior US official said on Wednesday.

The fighting in South Sudan, whose 2011 secession from Sudan was supported by the United States, has torn apart the world’s youngest country. The country’s rebel leader Riek Machar was sworn in as first vice president on Tuesday after he returned to the capital Juba for the first time since conflict broke out two years ago.

President Salva Kiir’s sacking of Machar as his deputy ignited a war in December 2013 which has killed thousands and displaced millions in the world’s newest country.

The United States has said Machar’s return is an important step toward the establishment of a unity government.

But Booth said an arms embargo could only work if neighbouring countries cooperated. The UN Security Council has long threatened to impose an arms embargo on South Sudan but veto-power Russia has been reluctant to support such an action.

An effective way to cut weapons supplies to South Sudan, Booth continued, was to impose strict controls over its capital expenditure, which would also help focus spending on the neediest.

“We all agree there are far too many arms in South Sudan and they certainly don’t need any more,” Booth said, “If we can use the financial side to get at preventing additional weapons from getting into South Sudan, that would be an easier way to do it and a more effective way to do it.”

He said the United States was looking at who was responsible for the pillaging of state coffers.

“We really want to make sure that resources of the country are going to be utilized for the people, so we’re taking a careful look at what has been stolen in the past and who stole it,” Booth added.

“We have already put the existing government and the opposition on notice that we would be looking for some kind of expenditure control mechanism in place, otherwise it would be very difficult to justify putting additional resources in support of stabilization of the macro economy,” Booth said.

The United States on Wednesday pledged an additional $86 million in humanitarian aid to help communities most hurt by the conflict.

It has provided an estimated $1.6 billion in assistance to the country since December 2013.