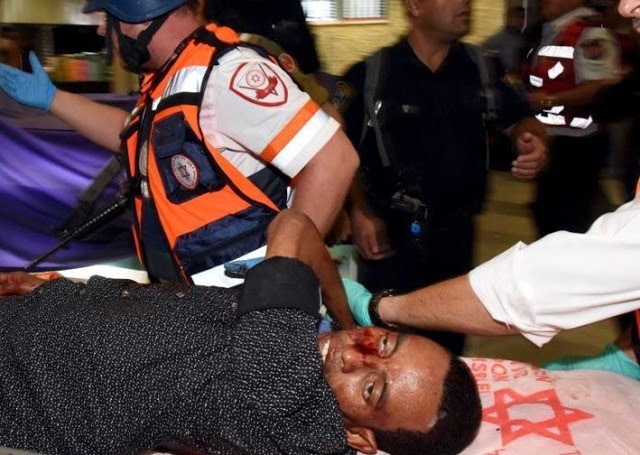 JERUSALEM, (HAN) October 19, 2015 – Public Diplomacy and Regional Investment Initiative New. By Maayan Lubell Mila Binsamo, 26, succumbed to his gun shot wound after a terrorist armed with a pistol and a knife stormed the Beersheba Central Bus Station on Sunday night, killing IDF soldier Sergeant Omri Levy, then  snatching his rifle and shooting and wounding at least 10 Israelis before being shot dead by police.   An Eritrean migrant, shot by a security guard and kicked by an angry Israeli crowd that mistook him for a gunman, was identified on Monday as one of the dead from an attack on a bus station in the southern city of Beersheba.

The Eritrean agricultural worker was named by his employer as Mila Abtum. In what some Israeli media described as a lynching, captured on amateur video on Sunday, the attack on Abtum underscored a mounting sense of panic and anger over a wave of Palestinian attacks that shows no sign of abating.

“We’ve a country of law. No one will take the law into his own hands,” he told his party’s lawmakers in broadcast remarks.

The almost three weeks of violence has killed 41 Palestinians, including assailants and demonstrators at anti-Israeli protests, eight Israelis and now one Eritrean. It was set off in part by Palestinians’ anger over what they see as increased Jewish encroachment on Jerusalem’s al-Aqsa mosque complex.

U.S. Secretary of State John Kerry, due to hold separate meetings this week with Israeli and Palestinian leaders, said on Monday it was vital they clarify the status around the compound, also revered by Jews as the location of two destroyed biblical temples.

Netanyahu has said he seeks no change to the decades-old status quo in which Israel bans Jewish prayer at the al-Aqsa site in the walled Old City of East Jerusalem, captured along with the West Bank in a 1967 war. He says religious incitement, speeded by social media, has fuelled the bloodshed.

“What we see here is a combination of extremist Islam and the Internet. It’s Osama bin Laden meets (Facebook founder) Mark Zuckerberg,” he said at the Likud party meeting.

In a bid to stem the most serious Palestinian attacks on its streets since an uprising a decade ago, Israel has poured hundreds of troops into its cities and set up roadblocks in Palestinian neighbourhoods of East Jerusalem.

In Gaza, Fathy Hamad, a Hamas leader, praised Palestinians who carried out attacks. “This intifada (uprising) will not stop, this Jihad will not stop,” he said at a public ceremony.

The Islamic State militant group released a video urging: “Jihad should not be a reaction that may soon fade away. You should use explosive devices and booby-traps in addition to hitting them (Israelis) with cars and stabbing,” one fighter said.

In the most recent incident, an attacker who police said was a Bedouin citizen of Israel entered the heavily guarded station armed with a pistol on Sunday and shot dead a soldier before snatching his rifle and opening fire on the crowd, wounding nine people.

Police shot the assailant dead, and initially reported there had been a second gunman. On Monday, they said there had been no other attacker and an investigation had been opened into the Eritrean man’s death.

Amateur video showed a security guard shooting the Eritrean. Lying on the ground bleeding, and with armed paramilitary police surrounding him in an apparent effort to protect him, he was kicked in the head several times by people who slipped through the loose cordon.

Nitza Neuman-Heiman, Deputy Director General of Soroka Medical Center, told Army Radio the Eritrean died of gunshot wounds and the injuries he sustained from the kicks.

Sagi Malachi, his employer, described Abtum as a quiet, modest man who had traveled to Beersheba to renew his visa. “The country is in a state of chaos. Civilians are confused, people are taking the law into their own hands,” Malachi said on the radio.

Israeli police erected a 10-metre (33-ft)-long concrete barrier on Sunday on a street that borders the East Jerusalem Palestinian neighourhood of Jabel Mukabar and an adjacent Jewish neighborhood, calling it a temporary precaution to prevent rocks and petrol bombs from being thrown at the Jewish dwellings. But it caused outrage at a meeting of Netanyahu’s security cabinet on Sunday, political officials said, because it was seen as essentially dividing Jerusalem.

Netanyahu, one official said, ordered police not to extend the barrier after right-wing cabinet ministers came out against the measure, which they deemed a de-facto division of Jerusalem.

Israel considers all of Jerusalem, including the eastern part that it annexed after the 1967 conflict, as its “indivisible and eternal capital”, a status not recognised abroad. Palestinians want East Jerusalem as the capital of a state they seek to establish in the West Bank and Gaza Strip.  reuters