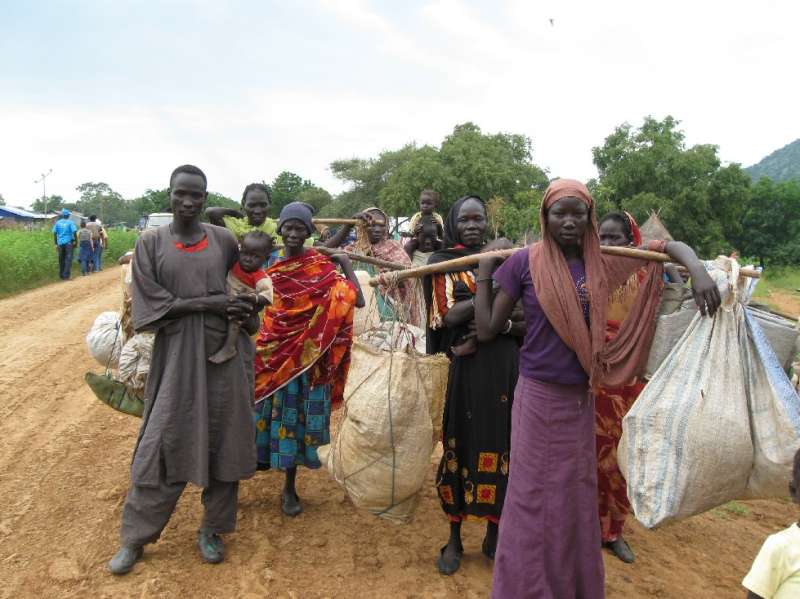 JPEG – 14.8 kb
A South Sudanese refugee with her child on one of the buses that moved volunteers from the flood-prone Leitchuor and Nip Nip refugee camps in western Ethiopia (Photo courtesy of the UNHCR)
The month of September, the agency said, recorded rising flows of South Sudanese refugees fleeing due to renewed fighting in parts of the young nation.

The new arrivals, according to UNHCR branch office in Ethiopia, include large numbers of unaccompanied children. The UN refugee agency said 29,769 South Sudanese refugees have arrived in Gambella, Ethiopia since 3 September 2016.

The new arrivals, the majority being women and children, cite fear over the renewed fighting in its Upper Nile State areas of Nasir, Maban, Mathiang and Maiwut.

Other refugees said food insecurity coupled with on going fighting over the spread of the conflict to the Jonglei State (Ayod, Akobo, Fangak and Uru) is also a major factor forcing South Sudanes flee their home country.

64% of the total new arrivals are children. Out of the registered new arrivals, 3,188 are unaccompanied and separated children.

The new arrivals, mostly originating from the Upper Nile State (80%) and Jonglie State (17%), reported to have fled from insecurity, recruitment and food shortage in war torn South Sudan.

According to UNHCR officials, an average of 1,000 South Sudanese asylum-seekers arrive on a daily basis to the Pagak Transit Centre in Ethiopia’s Gambela region

While over 12,600 have received wristbands and are awaiting registration around the border town of Pagak.

The refugees currently at Pagak and camps said they were crossing the border through Burbiey before having found their way towards Pagak.

“UNHCR is seeking alternate solutions to prevent further congestion at Pagak as well as to facilitate relocation to camps directly from the Barbiey” the UN refugee agency said.

So far over, 1,700 emergency shelters have been constructed in Jewi and Tierkidi camps.

As of 26 September, Ethiopia hosts more than 311,000 South Sudanese refugees, including more than 12,000 awaiting registration.

Most of the new arrivals originate from Upper Nile, Jonglei and Unity states.

Sudan Tribune has reliably learned that of the total $113.8 million appealed by UNHCR for the situation in Ethiopia, only 10% has so far been secured.