Home Daily Security Briefing UN visit to shore up support with the government and... 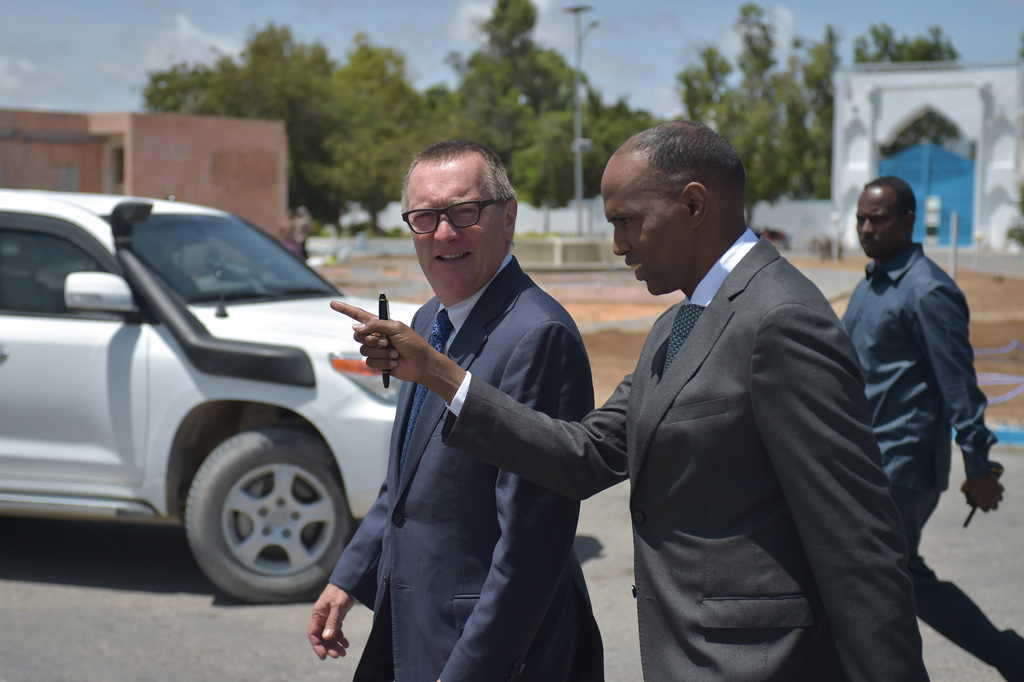 New York (HAN) 26 August, 2017 – Public Diplomacy & Regional Security for Stability.
The United Nations Under-Secretary-General for Political Affairs, Jeffrey Feltman, visited Somalia and held a series of meetings with the country’s leadership to show solidarity with the government and people of Somalia, as well as to reiterate the United Nations’ support to the new government and discuss ways to address the country’s challenges such as the recent drought and security.

The Under-Secretary-General was welcomed by the President of the Federal Government, Mohamed Abdullahi Farmaajo; Prime Minister, Hassan Kheyre; the Speakers of the Upper House and the House of the People; the Minister for Constitutional Affairs and the Chairperson of the National Independent Electoral Commission (NIEC). During his visit, he was accompanied by the Special Representative of the UN Secretary-General (SRSG) for Somalia, Michael Keating.

Speaking at Villa Somalia after meeting with the NIEC Chairperson, Halima Ibrahim, the Under-Secretary-General said the aim of his visit was to shore up support for the political progress the country is making as well as to explore how best to assist Somalia to overcome some of its challenges.

“I am here to reinforce and to demonstrate the support that the United Nations has for the people and the government of Somalia as the country addresses a number of challenges ranging from the drought, to security to the political agenda going forward,” Mr. Feltman said.

Mr. Feltman noted that despite the challenges facing the country and the recent drought that affected more than 6.2 million of its population, things were looking up for the Horn of Africa nation.

“I sense a real forward momentum in terms of political developments, in terms of reforms and transparency and of things moving forward to one-person one-vote electoral system for the 2021 parliamentary elections,” the USG added.

The UN official lauded the work undertaken by the NIEC in putting structures in place for the next parliamentary and presidential elections in 2021 and urged the leadership to move forward on the country’s constitutional review process.

The NIEC Chairperson said they are committed to setting up an institution that is acceptable to all Somalis ahead of the next election. “We have been working on how to build the capacity of this institution and also how to gain the political acceptance from Somalis whether they are politicians or civil society or governments [federal and state governments],” Ms. Ibrahim said.

Mr. Feltman expressed United Nations’ commitment to work with the people and government of Somalia in addressing these challenges in order to support the country realize its potential.

At a morning meeting with the country’s Prime Minister, Mr. Feltman was told of the renewed optimism in the country following the election of President Farmaajo in February.

“There’s a sense of unity in the country in a different way in which civil society, religious leaders, women and youth and every other group in society are now willing to join, contribute, take part and people see hope,” the Prime Minister said.

This was Mr. Feltman’s first visit to Somalia since the election of President Farmaajo and the swearing-in of the tenth Parliament. This is his fifth visit to Mogadishu since his appointment in 2013.