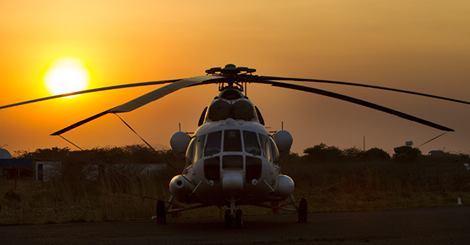 ADDIS ABABA (HAN) April 25, 2016. Public Diplomacy & Regional Security News. United Nations plane will transport the first vice-president designate, Riek Machar, on Tuesday, after United States and troika donors withdrew their funding for chartering a plane which was supposed to pick him and his officials on Monday from Gambella airport in Ethiopia.

This comes after arrival to Juba on Monday afternoon of the opposition’s chief of general staff, Simon Gatwech Dual, and 195 soldiers with their weapons on two flights.

Machar’s press secretary, James Gatdet Dak, said they have been informed that UN is ready to transport the top opposition leader to Juba on Tuesday.

“We have learned that UN will provide a plane to transport to Juba the first vice-president designate to Juba on Tuesday,” he confirmed to Sudan Tribune on Monday.

The chairperson of the Joint Monitoring and Evaluation Commission (JMEC), Festus Mogae, also confirmed in a televised statement on Monday that a UN plane will fly to Gambella on Tuesday and pick Machar with 40 of his officials.

Mogae made the statement after a meeting with President Kiir on Monday.

The leader of the armed opposition faction of the Sudan People’s Liberation Movement (SPLM-IO) earlier announced on Sunday that he was ready to travel to Juba on Monday. However, this did not happen due to the withdrawal of the plane by the U.S. government.

Washington said it was disappointed by the continuous delay of his arrival by the two parties: government and opposition faction.

Dak said if all goes well on Tuesday, the first vice-president will arrive in Juba and immediately take oath of office upon arrival.

Machar is also expected to make consultations with his officials and with President Kiir on the long-awaited formation of the transitional government of national unity in which the government will have 16 national ministers in the new cabinet, SPLM-IO will have 10 and other political parties and former detainees will have 4 ministers, 2 each.