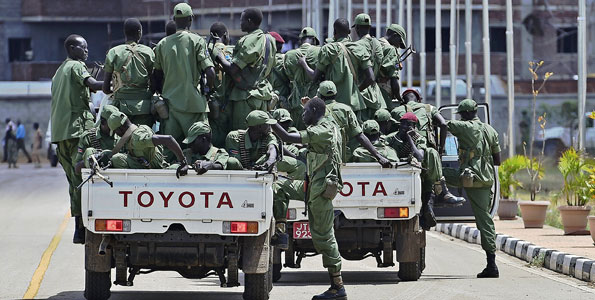 JUBA (HAN) September 14.2016. Public Diplomacy & Regional Security News. United Nations has announced extracting yet another group of bodyguards of the former First Vice President, Riek Machar, in the territory of the Democratic Republic of Congo (DRC) on Monday.

The number of Machar’s fighters in Congo has so far reached over 750, according to the United Nations spokesperson, Stephane Dujarric.

“In addition to information we shared with you on Friday, the UN Peacekeeping Mission in the Democratic Republic of the Congo (MONUSCO), has continued to extract this group of individuals from the Garamba National Park in the DRC. Yesterday the Peacekeeping Mission extracted an additional 118 persons on humanitarian grounds,” Dujarric told the press in New York on Tuesday.

“To date 752 individuals affiliated with the SPLM/A-IO have been extracted,” he added.

He explained that among those extracted, 631 are in UN-run facilities in three locations inside the DR Congo, with some receiving medical treatment while others recovering from exhaustion.

“Security arrangements are in place in all locations,” Dujarric said.

He said the UN has continued to engage with both the DRC and the South Sudan authorities as well as regional actors to encourage them to find a solution to the presence of South Sudanese armed individuals in the territory of the DRC.

“Authorities of both countries are regularly informed of actions taken on the ground,” he said.

Meanwhile, the opposition faction of the SPLM-IO has confirmed that dozens of their officers who were extracted together with Machar in the DRC have already arrived in Pagak, the General Headquarters, at the Ethiopian border.

“Yes, some of our officers who were accompanying our leader from Juba to the DR Congo have already arrived in Pagak,” Machar’s spokesperson, James Gatdet Dak, told Sudan Tribune on Tuesday.

He said among the officers who arrived in Pagak last week include their military spokesman, Colonel William Gatjiath Deng, who was extracted together with Machar at the DR Congo border on 17 August 2016. (ST)