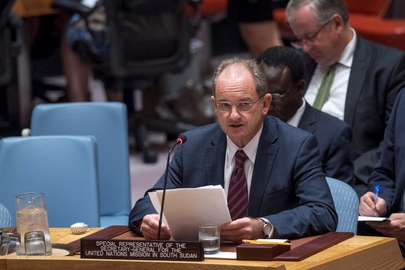 September 29, 2020 (KHARTOUM) – The head of the UN Mission in South Sudan voiced concern about the delay in the implementation of the revitalized peace agreement saying the lack of progress may lead to delay the election of 2023.

“My concern about the delay is that it risks pushing elections out well beyond the timeline in the agreement,” said David Shearer, in a press conference held in Juba on Tuesday.

“Cabinet is meeting irregularly, and people tell me that they want to see the President and Vice Presidents meeting and working closely together more often,” he said.

He also pointed out that the Transitional National Legislative Assembly has not been reconstituted, accordingly, necessary new laws are not being passed and progress on the constitution has been delayed.

While the international community and regional partners play an important role in supporting the peace process, the parties themselves must step up their efforts to regain lost momentum, he said.

After the signing of the revitalized peace agreement on12 September 2018, the peace partners extended the pre-transitional period twice before to form a government early this year.

The formation of the national and state governments as well as local governments is still going on as the parties are negotiating the allocation of the 79 counties in South Sudan.

He also, repeated calls for unfettered access to civilians in the country pointing that peacekeeping forces have been increasingly prevented by the SSPDF on the ground despite all the coordination and needed permission from the competent authorities.

“For years, we have had an agreement to notify the armed forces when our peacekeepers move around the country. We do this out of respect for the sovereignty of South Sudan,” he said