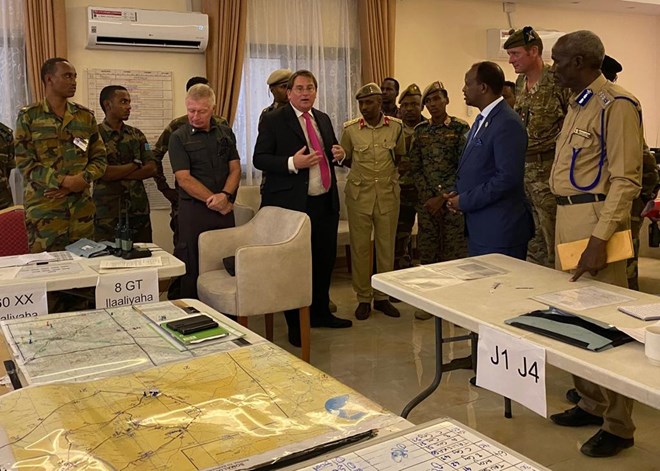 The first UK trains SNA brigade Headquarters to be trained in Somalia for a generation has completed command and staff training in Mogadishu.

According to statement by UK government, the team has returned to their headquarters in Baidoa, the capital of Southwest State in Somalia, at a UK provided barracks.

The command and staff course for Somali National Army (SNA) officers from Baidoa, was delivered by British Army personnel deployed on Operation TANGHAM.

The course covered planning and conducting stabilisation operations,and 19 SNA officers trained to work alongside national and international security partners including the Somali Police Force and African Union Mission in Somalia (AMISOM), as they battle against Al Shabaab.

The British Army commander who delivered the training, Lieutenant Colonel Alex Hutton, said the command and Staff course has given the officers from 8 Brigade a strong foundation in planning and control of Brigade-level operations.

“My team and I are now looking forward to developing their skills and continuing to advise them in-person from our training base in Baidoa,” said Hutton.

The contingent was recently visited by the Somali Minister for Defence and the British Ambassador to Somalia.

Addressing the students and visiting senior members of the Somali National Army, the British Ambassador to Somalia, Ben Fender OBE, said effective planning and oversight of operations is vital to defeat Al Shabaab

our ground-breaking course for SNA officers will give them the skills that they need in order to plan and conduct effective operations.