Yegna, which aims to enhance the role of women through music and performance, was reportedly promised £5.2m of taxpayer’s money to develop a radio drama.

Following criticism over the amount of money being granted to them, the Department for International Development (DfID) confirmed that the partnership has now ended.

A DfID spokeswoman said: “Empowering women and girls around the world remains a priority, but we judge there are more effective ways to invest UK aid and to deliver even better results for the world’s poorest and value for taxpayers’ money.”

Responding to the decision, the Girl Effect project that launched Yegna and promotes women’s rights in Ethiopia said that “new ideas are often resisted and sometimes willfully misrepresented”.

At the time she said the Yegna grant was simply “one component” in a wider programme promoting the rights and well-being of women and girls in the country. 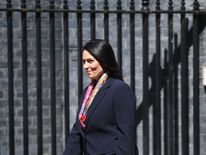 “We are doing a range of work there. That is just one programme, one project. It is actually doing substantial work combating the issues that I’ve highlighted. But at the same time all programmes are under review.”

Senior Tory Nigel Evans, who challenged Ms Patel about the project at the select committee hearing, welcomed the announcement as a “great victory for common sense”.

He added: “She can now ensure that the money that people want to see spent on the very poorest and saving lives, producing medicine and drugs to the most vulnerable throughout the world – that money will now be spent far more effectively.”