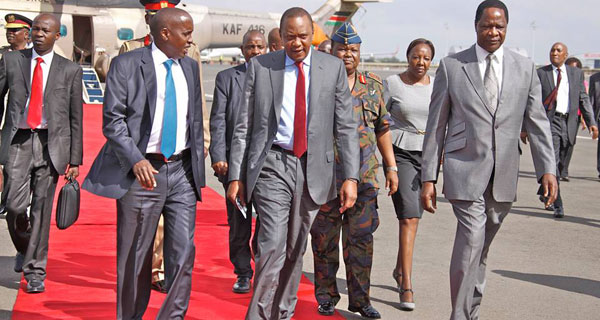 Kenya’s President Uhuru Kenyatta is in Juba to discuss with his South Sudanese counterpart Salva Kiir the progress of the implementation of the peace deal signed last year in a bid to end conflict that threatens to tear the country apart.

President Kenyatta serves as the focal point for the Intergovernmental Authority on Development (Igad) peace process in South Sudan. Igad is a grouping of eight Eastern Africa nations that focuses on development and drought control in the region.

The two leaders are scheduled to address a joint press conference after holding talks at State House, Juba.

Last week, the Igad said that it was up to the South Sudanese government to decide whether opposition leader Riek Machar, who was replaced by Gai as the first vice-president after fleeing Juba, should be reinstated.

Machar is still in Sudan receiving treatment for an injury suffered in the Democratic Republic of Congo, where he had fled after fresh fighting erupted in Juba.

Machar’s replacement was not consistent with the terms of last year’s peace agreement between the South Sudan warring parties.

However, when the United States Secretary of State John Kerry visited Nairobi on Monday last week he expressed support for South Sudan’s replacement of Machar, saying “it’s quite clear that legally, under the agreement, there is allowance for the replacement, in a transition of personnel, and that has been effected with the appointment of a new vice-president.”

But Machar’s followers have accused President Kiir’s government of violating the terms of last year’s peace agreement and vowed to oppose Gai’s appointment.