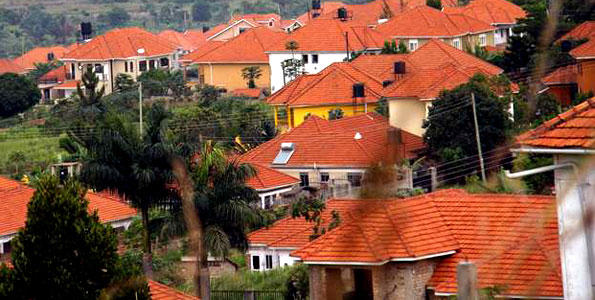 Uganda’s housing deficit stands at 1.6 million units. The annual demand on the other hand has grown to roughly 200,000 residential units per year, industry analysts say.

They project an additional demand of 2.4 million housing units over the next four years amid a steadily rising population and slow growth in the development of large-scale housing estates.

The country’s population stood at 34.6 million people by the end of August last year, reflecting a 3.2 per cent annual growth rate since 2002, according to census data compiled by the Uganda Bureau of Statistics.

“About 69 per cent of the Kampala’s population lives in rented quarters, the cost of which remains out of the reach of the majority. High-end houses in Najjera and Naalya regions for example, cost Ush400,000 -Ush800,000 ($109-$219) per month while a one-roomed, semi-permanent house in a Kampala slum costs Ush30,000 ($8.2) per month,” says Judy R. Kyanda, managing director at real estate management and consultancy firm, Knight Frank Uganda.

She added: “This shows that there are opportunities in affordable housing products. But that 50 per cent of Uganda’s population earns less than Ush640,000 ($174.9) per month makes mortgage facilities unaffordable.”

Commercial mortgage loans carry an average interest rate of 18-21 per cent per annum alongside an equity contribution of 10-20 per cent of the property value. Equally, delays in processing land titles — which sometimes take longer than three months — have added to the cost of acquiring decent homes.

High infrastructure costs due to the absence of water, electricity lines and good roads in remote areas are also partly to blame for the steep prices of decent homes.

Industry experts estimate the cost of infrastructure development in remote areas to be between 15 and 20 per cent of total investment costs incurred by developers, with minimal government support realised during project implementation.

Affordable housing projects currently underway include the Bukerere Housing Estate comprising of 3,600 residential units designed by the National Housing and Construction Corporation, and the Sentema Affordable Housing project by Buganda Land Board, comprising of 940 units two kilometres away from the city centre.

“We are looking at partnering with major financial institutions such as the International Finance Corporation and Shelter Afrique to raise the needed capital to execute our housing projects,” said Kyewalabye-Male, managing director of Buganda Land Board, the property administration unit of Buganda Kingdom.