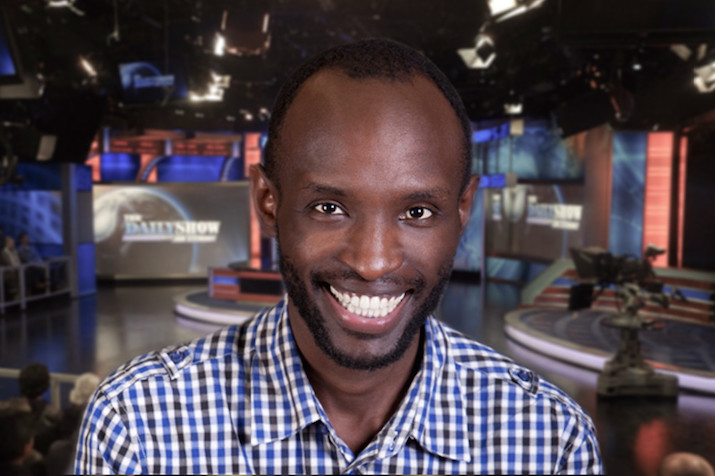 Joseph Opio has always been serious about comedy. So serious, in fact, that he walked away from a promising newspaper job in Kampala, borrowed a large sum of money, and went to the US to try to make people laugh.

Some people end up in comedy the way a drunkard stumbles into a previously unknown tavern on his way home. Others linger in comedy, waiting for an opportunity to move on to acting or a proper job. For Opio, comedy was the journey and the destination.

We meet in a small busy restaurant in mid-town Manhattan, (in the state of New York) after a live recording of Comedy Central’s The Daily Show with Trevor Noah. (Noah, a South African, took over from Jon Stewart who retired from the show after a decade).

Opio’s fortunes are closely hitched to the South Africa-born comedian’s wagon but he has laced his bootstraps himself. 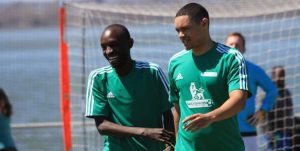 He was one of the best A-level students in Uganda and, after reading for a law degree, landed a job with a major audit firm in Kampala. But the life of stuffy suits did not sound appealing; moreover, he’d been drawn to comedy in his early teens when he watched Bernie Mac and The Original Kings of Comedy.

He dabbled in sports journalism at the New Vision newspaper in Kampala where he landed a sub-editing job at 17 while still a student, but the newspaper world, away from the sports pages, was full of grim news stories.

“Instead of complaining, I decided to vent using comedy,” says Opio. The result was a comedy show, LOL Uganda, on Urban TV, a small station in Kampala. Opio wrote, edited, directed, produced and presented the show.

Although only in his 20s and despite the show being only mildly popular on a small, start-up station, Opio quickly became, he says, the highest-paid television presenter in the country.

But it wasn’t enough. “Most people want to be the biggest fish in a small pond,” he says, “and the problem with [many] Ugandans is thinking small.”

Opio’s first break came during a visit to South Africa to attend a reception for the comedy Late Night Show. He met the right people and made such an impression with his jokes during the chitchat that he was invited back to work on the South African comedy circuit.

Within a month of moving to South Africa, he had become the first foreigner to win the Nando’s Showdown, a stand-up comedy face-off in Johannesburg.

Opio was tempted to put down roots and try to make a comedy career in Johannesburg but he learnt that the SA show he’d written some jokes for on his earlier visit had been nominated for an international Emmy and its host, Trevor Noah, had moved to the US to try his luck on a bigger stage.

Never short of confidence, Opio returned to Uganda, worked on a screenplay, looked for money and applied for a US visa. Soon after, armed with a fistful of borrowed dollars and a suitcase of dreams, Opio landed in New York.

In November 2014, Opio met Noah at the Comedy Cellar in New York, a popular venue for comedians trying to get into the business. Opio had had to cajole and beg a bouncer to let him in, and then cajoled some more to get a chance at the microphone.

They’d never met but Noah had heard about Opio on the SA comedy circuit and they hit it off immediately, chatting from 8pm to 3am.

A few months later, Noah was handed The Daily Show, replacing Jon Stewart. Although Noah had, by that time, spent six years playing the stand-up circuit in America, it was a gamble by Comedy Central to put a foreign comedian with a distinctive accent (and who speaks six languages) in one of the most coveted late-night TV seats.

To add to the complexity, Noah decided to give the show a more global appeal, embracing diversity and bringing in writers who knew about American issues, but also about the world. Opio was hired as one of the writers.

His impact was almost immediate, lampooning Donald Trump, then a long shot in the Republican primaries, as potentially America’s first African president in the mould of former Ugandan dictator Idi Amin — but it wasn’t all smooth sailing.

Nightly ratings dropped as American viewers struggled to come to terms with the exotic humour and accents on the show. Fortuitously, Trump would become the gift that kept on giving and as he gained momentum in the presidential race, so did the show in the nightly ratings.

In October 2016, just before the US election, The Daily Show was both the highest-rated and most-watched ad-supported late-night talk show among millennial men (both 18-34 years and 18-24 years), the group Comedy Central most aggressively targets, according to The Hollywood Reporter, an entertainment website.

It has more non-white viewers and its overall viewership has become younger and more diverse, as it spreads out across platforms and geographical boundaries.

As the show rises, so have Opio’s fortunes; he paid off the loan he took to travel to the US within weeks of being hired and he describes living in Manhattan, where he rents an apartment, as “mind-blowing.”

We find a tiny table in the crowded restaurant and Opio orders a cappuccino. I order a draught beer. It is a popular pit stop for the workers on the show including Noah (he doesn’t show this evening) and Opio points out some of his fellow writers.

“Everyone at work has an Emmy,” he says, looking around the dimly-lit bar. “Except the new guys.” It can only be a matter of time.

Opio and his fellow writers on The Daily Show have been nominated for the 68th annual Writer’s Guild of America awards in February in the comedy category. Just joining the Guild is an achievement in itself, Opio says, pointing out that it has 300 members while the National Football League has 3,000 players.

“There is a higher statistical chance of joining the NFL than the Writer’s Guild.”

It’s a long way from Kampala to Manhattan but Opio’s journey may still have some miles in it, from the East Coast to Hollywood, with dreams of writing movies, screenplays and sitcoms. It is a journey with many stops and a constant loop of challenging oneself.

“That’s how you know that you are growing — when you look back at things you did a few months ago and you are embarrassed.”

Does he not worry about failing? About the career he turned his back to?

“If I can go and perform at the same club as Chris Rock and I am not laughed out of the place then I’ll take my chances,” he says. “If you are rejected at Barcelona, you can always go back to Mamelodi Sundowns,” he adds in a footballing reference to the Spanish side and a smaller club in South Africa.

“My family has always been proud of me,” he adds suddenly, with introspection. “Being good in school helped, that’s probably why I have no self-doubt — it’s something I’ve never had.”

He speaks a lot, and quickly, his mouth a wrestling arena between an American and a thick Ugandan accent. I ask if the Ugandan accent makes it easier for him to write jokes rather than perform them in stand-up comedy clubs.

“There are only two things Uganda has given me,” he says, bursting into laughter, “a bad accent and trouble at immigration…”

“Seriously though,” he adds, “as a Ugandan you have to fly to get what an American gets by just walking. You already have an accent, so you have to make sense when you speak.”

I pick up the tab and we walk out into the crisp autumn night. We shake hands and I watch Opio as he walks towards the bright lights of mid-town Manhattan.

It is not Fifth Avenue and there’s no walking cane by his side but you can hear it in his accent when he talks; Joseph Opio is a Ugandan in New York. He’s hungry, ambitious and funny as hell.