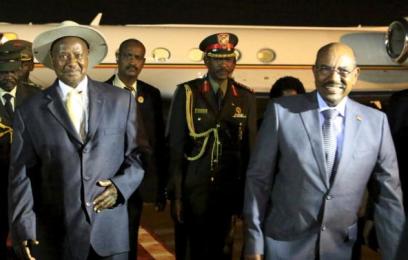 The Ugandan President who is now a close friend to President Omer al-Bashir attended the National Dialogue Congress in Khartoum last October and launched a call for the armed groups to join the internal process.

In a statement released on Sunday, the SLM-MM and JEM said their leaders Minni Minnawi and Gibril Ibrahim respectively met with President Museveni on Saturday 24 morning “to discuss ways to re-energize his initiative to support the peace process in Sudan”.

In their meeting with President Museveni, the two leaders stressed that “it is difficult to join the negotiating table while the regime continues to arrest opposition leaders, political and civil society activists simply because they opposed the recent economic measures and policies,” said a statement extended to Sudan Tribune.

The implementation of the African Union Roadmap Agreement is the way to way to reinvigorate the peace process and achieve a comprehensive political settlement, Minnawi and Gibril stressed.

They further urged him to intervene to ensure the release of the detained opposition leaders.

The opposition Sudan Call leaders including JEM and SLM-MM signed last August a road map brokered by the African Union High Level Implementation Panel (AUHIP) providing to sign a humanitarian truce and hold a preparatory meeting before to join the internal dialogue process.

Following the failure of the parties to reach the needed agreements for the humanitarian cessation of hostilities, the government endorsed the outcome of its dialogue process and called on the opposition to join it.

The holdout groups, on their part, call on the government to consider this internal process as a first phase for the inclusive dialogue process with all the opposition forces.