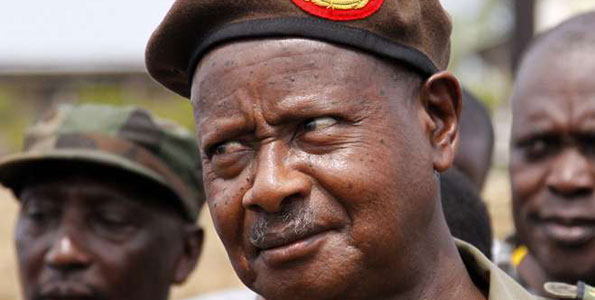 Ugandan President Yoweri Museveni continues to shakeup top leadership in the country’s key security organs and has now fired the head of the internal spy agency.

Brigadier Ronnie Balya, who served as the deputy director-general of the Internal Security Organisation (ISO) since 2006 before taking the helm in 2010, has been replaced.

Taking over from him is retired Major Kaka Bagyenda, an army veteran who was among soldiers that fought alongside President Museveni in the 1981-86 bush war which brought the latter to power.

Brig Balya has been named an ambassador but without a posting. He becomes the second spymaster to be replaced barely two weeks after the head of the military intelligence, Brig Charles Bakahumura, was transferred to Chief of Logistics and Engineering.

President Museveni has over the last two weeks made a raft of changes in the army leadership, including replacing the country’s Chief of Defence Forces, Gen Katumba Wamala with Maj-Gen David Muhoozi.

The president also named his son Maj-Gen Muhoozi Kainerugaba Special Presidential Advisor for Special Operations. Maj-Gen Kainerugaba, prior to the new role, was the head of the elite Special Forces Command, which among other things is also in charge of the president’s security.

The reshuffles also saw the promotion of Brigadier Proscovia Nalweyiso to a Maj-Gen, becoming the first East African woman to hold such a rank.

The shakeup has dominated public debate with many now speculating that the president would also extend the changes to other security organs especially the police which is headed by Gen Kale Kayihura.