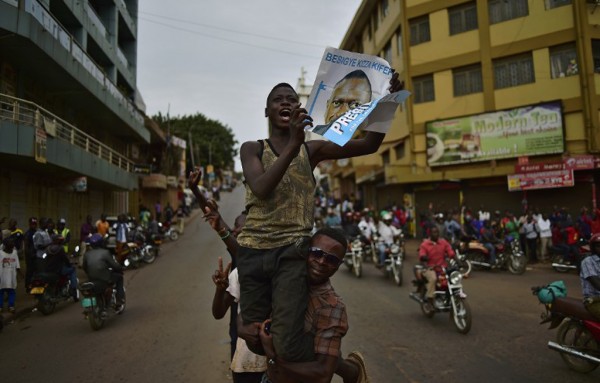 Tweyambe was arrested in the Rukungiri District of Western Uganda, before being transferred to neighbouring Ntungamo district by the authorities.

“Our campaign manager was arrested on Saturday morning and spent Saturday night in jail,” tweeted Besigye, who heads the Forum for Democratic Change (FDC).

Besigye lost to incumbent President Yoweri Museveni, and his National Resistance Movement (NRM) party, in the February 18 presidential elections, which extended Museveni’s 30-year reign and gave him a fifth-term in power.

Besigye, who has also been arrested numerous times and is currently under house arrest, said that Ugandan police and intelligence officials were demanding election results and forms from Tweyambe’s laptop.

“This is not an isolated case. Many of our FDC leaders and election agents have been arrested since the February 18 election. Please remain firm and steadfast, we shall overcome. Shame on the scared NRM regime,” said Besigye.

Neither the Ntungamo police nor Tweyambe were aware of what the charges are, but Tweyambe said he believed his arrest was connected to Besigye’s victory in Rukungiri.

“For the first time since 2001, Besigye defeated Museveni in his home district getting 56 per cent of the total vote cast,” reported Uganda’s Sunday Monitor.

The police said they were ordered to arrest the campaign manager and await further instructions for his transferral to the capital Kampala.

However, a security source in Rukungiri who preferred anonymity told the Monitor that Tweyambe is accused of “sending inciting messages via social media and is destined for the special crime investigations unit Kireka Kampala”.

He said Tweyambe’s detention in Ntungamo was meant to avoid violent scenes in Rukungiri town that could see people attack police to demand his release.

Besigye, and many other critics, has accused the Ugandan authorities of rigging the February 18 presidential elections, robbing him of a substantial number of votes.

Mbabazi, who used to be a member of the NRM, was also a presidential candidate, but ran as an independent. His petition seeks to annul Museveni’s victory.

On Monday, nine Supreme Court judges will meet the petitioner’s lawyers, and defence for the respondents, which include Museveni, the Electoral Commission and the Attorney General.

Meanwhile, Ugandan daily, The Observer, reports that Besigye’s continued house arrest has required the deployment of 150 uniformed and plain clothes officers at a daily cost of 8 million UGX (nearly $2,500.00), near the opposition leader’s Kasangati home outside central Kampala.

The uniformed police are securing Besigye’s home and are conducting foot patrols in the area to ensure there is no “chaos”.

The deployment began on February 18 when Besigye stormed a house in Naguru claiming government agents were stuffing ballots into boxes there, reported The Observer.

In a related development a group of Ugandan journalists in Kampala have called on their colleagues nation-wide to boycott news related to the country’s police and security forces in protest at what they say has been the intimidation and harassment of journalists trying to cover the stand-off by the security forces.

Arnold Mukose the coordinator of the boycott remarked that “the harsh treatment of the media by police was a big threat to journalism”.