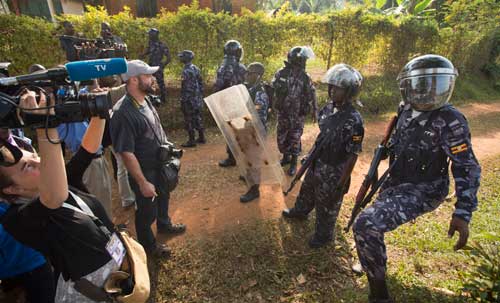 Nairobi (HAN) May 10.2016. Public Diplomacy & Regional Security News. Ugandan authorities should cease attempting to intimidate journalists in an effort to keep them from covering protests, the Committee to Protect Journalists said today.

Ugandan Minister for Information and National Guidance Jim Muhwezi on May 5 warned journalists that any news outlet that reports on opposition protests over the conduct of February’s presidential elections could face closure, according to press reports. Uganda’s political opposition has called for nationwide protests to mark the inauguration ceremony for President Yoweri Museveni’s fifth term, scheduled to take place in Kampala on May 12.

“All live broadcast of defiance activities should stop. Any media house that continues to cover them risks having their license revoked,” Muhwezi, a retired military officer, told reporters, according to Kampala’s daily Monitor. Those who cover the protests on social media could also be punished, the head of Uganda’s Communications Commission said, according to the BBC.

“The Ugandan government must stop trying to bully the media into silence,” CPJ Deputy Executive Director Robert Mahoney said. “Political protests are news and the press has a duty to the public to report on them.”

Uganda’s opposition Forum for Democratic Change, citing local and international observers, alleges that the elections were marked by irregularities and should be held again, according to press reports. Ugandan authorities say the poll was fair, and in late April obtained a court order declaring the protests illegal.

CPJ research has found that attacks against reporters covering the election have produced a climate of fear among Ugandan journalists.