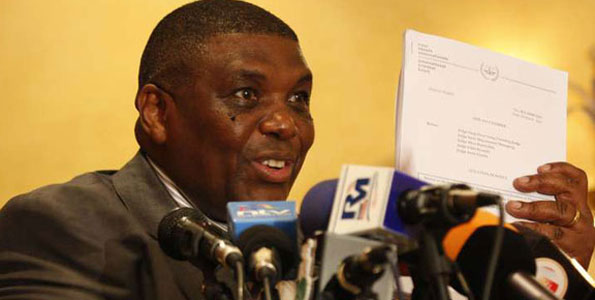 According to the ICC, Mr David Nyekorach Matsanga forged invoices and bank statements, and named bank account holders who either do not exist or do not come from the country he cited.

The Ugandan had made the allegations in a case against Ms Gurmendi. He had claimed that the ICC president received money to bribe witnesses for the court to indict Sudan’s President Omar al-Bashir.

He had alleged that Ms Gurmendi received the cash from Sudanese organisations that were out to fix President Bashir using the court.

Mr Matsanga claimed Ms Gurmendi received into her private bank accounts unexplained funds amounting to more than $17 million, which were then used to bribe witnesses to indict President Bashir.

The ICC issued its first warrant of arrest against President Bashir on March 4, 2009, and the second one on July 12, 2010, but he has not been arrested yet by any signatory to the Rome Statute that established the ICC.

In a statement, ICC spokesman Fadi El Abdallah said the allegations had been taken through the Independent Oversight Mechanism (IOM) by the institution and found to be false.

The IOM is an independent body established by the Assembly of States Parties as an inspection, evaluation and investigation mechanism for the ICC.

“These allegations concerning the supposed involvement of the president with payments to Sudanese rebel groups are based on forged evidence and are, therefore, demonstrably untrue,” Mr Abdallah said in a statement.

“Indeed, the only evidence offered by Mr Nyekorach Matsanga on this supposed involvement is contained in an alleged invoice that was confirmed to be forged by the entity that had issued it. The issuing entity confirmed that the client and address details, which now include the ICC president’s name, were altered on the invoice.”

The ICC said it had noted that it was not Mr Matsanga’s first time to criticise its officials.

Ms Gurmendi, an Argentinian who rose to the helm of the ICC in March 2015, was also accused of having money in several bank accounts, which the IOM said was not evidence of misconduct.

“The president has in any event asserted that she does not have any accounts with the institutions named in the report, or in the jurisdiction named,” said the ICC in a statement.

Mr Matsanga has been a vocal anti-ICC activist. He has accused the court of using its processes to punish African leaders.