Home frontpage Uganda: What Do Somalia Sheep, Goats and Ugandan Doctors Have in Common? 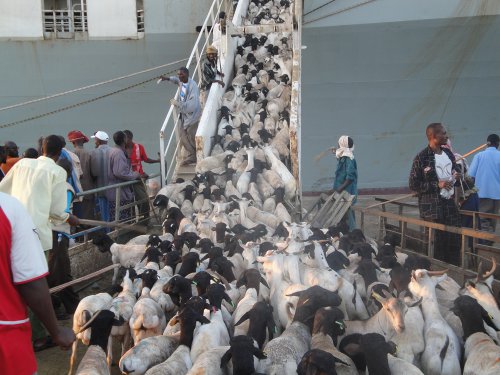 Special obsevation report By Charles Onyango-Obbo, this is a story about a Ugandan doctor.

He has discovered some very exciting things about Ebola that I don’t understand, but clever people who know their medicine are jumping up and down about.

How did he end up in Canada?

To that, we shall return after a journey through, of all places, Somalia.

The men of the Uganda People’s Defence Forces (UPDF) are serving bravely in Somalia as part of the African Union peacekeeping mission, Amisom (despite the fact that someone is “eating” their salary and their pay is in arrears by months, according to Daily Monitor).

However, that “failed” Somalia where UPDF is keeping the peace, exports nearly 5 million goats and sheep a year – more than any other country in the world. They also export more than 340,000 cattle and 77,000 camels, raking in an estimated $360 million a year.

Okay, Uganda might not be in goats and sheep so we can’t compete there, but we are – if the picture President Yoweri Museveni paints daily is to believed – a cattle people. But that broken Somalia where UPDF is keeping the peace, also exports more cattle than we can dream of.

When the UN released those figures of Somalia livestock exports, most of it to the Middle East, the big Ugandan story was the announcement that the government was to help export Ugandan university graduates to go and work in Saudi Arabia as “houseboys and housegirls” (or domestic professionals, as I would refer to them).

I am one of those who thinks a graduate working as a domestic assistant, is more honourable than one who begs or sits around waiting for the dream job to come along, but we shall not go into that today.

Anyhow, when we published the story, a Ugandan noted that it was an irony. Uganda was keeping the peace in Somalia, he said, but that Somalia exports more livestock than Uganda. And now Uganda was sending its graduates to the Middle East, some of whom might end up herding the goats and sheep Somalia exports there! It was too much for him, he said, he needed help to understand it.

The Uganda government too, was in the process of exporting health workers to Trinidad & Tobago.

One story that explains the structural reason why the Museveni government has fallen in love with this people export business, came from an unlikely source.

On the website http://www.internationalhealthpolicies.org a Ugandan, Agnes Nanyonjo, published an article titled “Ugandan innovation could end up being manufactured elsewhere: the plight of a young scientist in Africa”.

It is the story of a Ugandan doctor, Misaki Wayengera. Watching the Ebola epidemic in Uganda in 2000 and 2001, as a student at Makerere Medical School, Wayengera was determined to do something about it.

After his internship in 2005, Wayengera went for graduate training at the University of Toronto. As Nanyonjo tells it, his dream, among other things, included “inventing an HIV-1 cure and rapid tuberculosis diagnostics”.

He returned to Uganda, and plunged himself into his pursuit, researching the Ebola virus. His aim was to “come up with a simple and accurate test which would be able to detect several strains of Ebola in less than 15 minutes for use at the community level”.

He made progress, but couldn’t go further because he lacked funds.

He wrote to the President’s Office in 2008 for financial support, and after two years of waiting he got a reply. To their credit they acknowledged he was doing the kind of stuff Uganda needed. And they would support him. Nothing happened.

Museveni got to learn of his case, was unhappy that his office had kept Wayengera “on bitala” for two years, and made all the right noises. Nothing happened.

Then Wayengera applied for funding from Grand Challenges Canada in 2013. They gave him Canadian $100,000.

They said they would award to him an extra one million dollars for his research, if matched by financial commitment (of any value) to the project by his home government.

Wayengera tried, tried, and tried, nothing.

When Ebola hit in West Africa, and Wayengera wasn’t getting a penny from Uganda, the Canadians decided the charade couldn’t continue – they gave him and his research team the CAN$1.5 million he needed.

The money enabled Wayengera and his team to continue with their research which led to a breakthrough innovation. His test is able to detect Ebola in less than five minutes; he has already filed a patent with the World Intellectual Property Oganisation (WIPO).

Wayengera is now looking to manufacture and scale up his technology in North America.

That story tells why we shall protect Somalis as they export livestock we can’t export. And why our government thinks it’s more profitable to export doctors, than to support them innovate and grow rich at home.

Photo: Goats and sheep are northern Somalia’s principal export. The black headed sheep is especially prized in the Middle East.