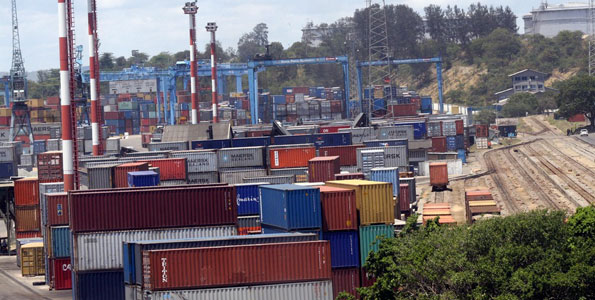 NAIROBI (HAN) April 20, 2016. Public Diplomacy & Regional Security News. By ALLAN ODHIAMBO. Uganda has cautioned its traders to remove overstayed cargo at the Mombasa port before next month when a final waiver on storage charges expires.

An estimated 637 cargo containers destined for Uganda have been lying at the port for more than 21 days, the Uganda Revenue Authority (URA) said, raising concern over congestion at the gateway facility.

“Owners of these goods are requested to immediately clear the goods out of the port as delays in clearance will lead to accumulation of storage and customs warehouse rent charges. Please note that prolonged stay may lead to the goods being deemed to have been abandoned and be disposed of through auction to create space for incoming cargo,” URA said in a public notice published on Monday.

The Kenya Ports Authority (KPA) and the Kenya Revenue Authority (KRA) in March extended an amnesty to traders to removed overstayed cargo from the port.

The two agencies said all storage, demurrage charges and customs warehouse rent accrued on long stay cargo discharged at the port on or before November 30, 2014 would be waived in full.

“The cargo must however be cleared and removed from the port or container freight stations (CFS) within 60 calendar days with effect from March 14,2016 up to May 12, 2016,” the agencies said on February 29 adding that any cargo that shall not have been removed by the deadline would be destroyed.

“Importers are therefore advised to take advantage of this final amnesty and clear their goods before the expiry date,” they further said.

A 20-foot container attracts a storage fee of $25(Sh2, 525) a day and $40(Sh4, 040) for double the size, which the KPA currently forgoes, thanks to the waiver. The overdue cargo also attracts demurrage charges on containers used to store the merchandise.

When the waiver lapses, owners of the overstayed cargo will have to meet the full charges and risk having the cargo auctioned should they fail to remove them from the port. According to customs regulations, goods have to be cleared within 21 days after which they attract customs warehouse rent.

Previous waivers have failed to stir action among traders, forcing authorities in the region to grant numerous amnesties. Authorities at the port in February 2015 waived storage charges accrued on all cargo discharged at the facility by November 30, 2014 provided that the cargo was cleared and removed within 60 days.

The warehouse rent waiver was further extended by 60 days following a summit by regional Heads of State in Kampala on June 6, 2015.

The ineffectiveness of the waivers has partly been linked to political horse-trading between Nairobi and Kampala. In 2015, a long-running feud between Ugandan traders and Kenyan authorities over the auction of uncollected cargo at the port was escalated to the East African Community leadership amid claims of unfairness.

Uganda also raised concern over increased impounding of suspected counterfeit goods meant for its market. In an attempt to douse the feuds with Kenya, the URA resorted to issuing regular notices to traders to clear their cargo from the port to avoid penalties, including auctioning of overstayed goods.

In a deal between Kenya and Uganda, cargo containers destined for Uganda through Mombasa port have also since March 2014 been publicly listed to help ease congestion at the region’s main gateway facility through efficient and timely flow of information.

A special online portal provides an account of all container shipments bound for Kenya’s largest export market, including the date and time of arrival at the port of Mombasa, the consignees and the duration at the facility.

Kenya is a key gateway to the region in that the Mombasa port handles imports such as fuel and consumer goods for Uganda, Burundi, Rwanda, South Sudan, the Democratic Republic of Congo and Somalia and exports of tea and coffee from the region.

Mombasa port has in recent years experienced cargo congestion, which the KPA attributed to lack of space following delays by importers and clearing agents to promptly collect containers from the facility and various container freight stations (CFS).
aodhiambo@ke.nationmedia.com