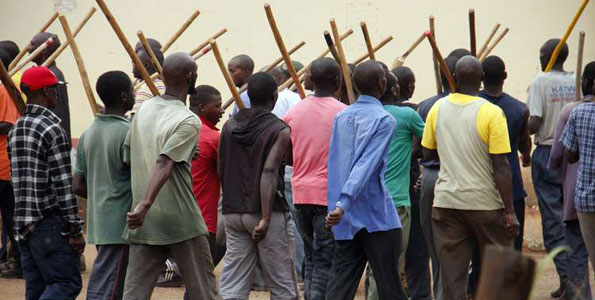 KAMPALA (HAN) January 2, 2016 – Public Diplomacy and Regional Stability Initiatives News. As Uganda’s presidential race enters the home stretch, efforts by the three leading contenders – President Yoweri Museveni, former prime minister Amama Mbabazi and Forum for Democratic Change flagbearer Dr Kizza Besigye – to make the most of the remaining 45 days of campaigning are certain to drive up political temperatures and probably spark more violent confrontations than have been reported so far, some analysts say.

The earliest indication of rising tensions came on December 13 in Ntungamo municipality, when supporters of Mr Mbabazi clobbered the president’s followers, who had attempted to interfere with the former premier’s campaigns in the district. The southern district of Ntungamo is one of 59 electoral violence hotspots, the Uganda Human Rights Commission said recently.

The clashes there were violent incidents reported since the campaigns began on November 9, according to Ushindi kwa Uganda, a self-reporting online site that is tracking and aggregating election violence in this year’s elections. More recently, in December, there were more clashes in Gulu district, where Dr Besigye had scheduled rallies, but supporters of Deputy Speaker of parliament Jacob Oulanyah disrupted the meetings, prompting Electoral Commission chairman Dr Badru Kiggundu to write to Mr Oulanyah over this violence.

“He should not carry the title of Deputy Speaker to rallies. I wrote to him and said that he was on the wrong,” Dr Kiggundu told The EastAfrican in an interview. Mr Oulanyah is defending his parliamentary seat of Omolo county in Gulu district. These incidents are being seen as the start of full-blown violence for the remainder of the campaigns.

“As we draw nearer to the end, the excitement is certainly increasing as candidates put in a lot more effort to win more support and with that we can expect some confrontations. A lot of candidates were waiting for January to begin real campaigns. The first months seemed generally devoted to warming up,” said Namugwanya Betty Bugembe, chairperson of the Parliamentary Committee on Defence and Internal Affairs, which approved Ush51 billion ($14.85 million) for tackling election-related violence.

“The three leading presidential candidates have all been drawing large crowds, and many think these will automatically translate into votes. So the election results are likely to be contested either by the candidates themselves or their supporters. As a country, we would not like to be caught off-guard like the last time of the Walk-to-Work protests,” added Ms Namugwanya.

Two months after the 2011 elections, a series of street demonstrations spearheaded by the opposition to protest hyper-inflation in food and fuel prices broke out in Kampala and a few urban centres. The state responded with brutal force to quell them. As a result, a number of people lost their lives while scores others sustained injuries. This year, some analysts say the triggers likely to spark off violent confrontation are varied and range from continued interferences in other candidates’ campaign activities to perceptions of unfairness in any part of the electoral process.

But perhaps more important than the triggers is the presence of militias that are likely to provoke the skirmishes. On the one hand, are the so-called crime preventers and on the other, counterforces that politicians have assembled. “The re-emergence of militia/vigilante groups has increased tension among the citizens, given that voters and their candidates have been handled with brutality on several occasions,” said a November report by the Citizens Election Observers Network – Uganda (CEON-U), which listed 11 such documented groupings.

CEON-U is a consortium of 18 civil society organisations that is conducting a “unified, comprehensive and effective” domestic election observation mission for the general election. It has observers in up to 200 constituencies across 16 regions. “From our observations, there is a great deal of anxiety among the public regarding nearly every part of the electoral process. There is lack of clarity on the voters’ register — what form of identification people will use to cast their votes,” noted Dr Martin Mwondha, the national co-ordinator of CEON-U.

“There is a perception that security agencies are one-sided in the way they handle election-related complaints, and the ambiguous role of the so-called crime preventers is a cause for concern,” added Mr Mwondha. The crime preventers in particular have been a constant source of contention since the police began recruiting and training them in early 2014. Although officially they are supposed to be non-partisan, in practice they form mobilisation and other support networks for the ruling NRM. They have been sighted at its campaign rallies and have been accused of instigating the incidents in Ntungamo.

On December 24, parliament heard that they were going through the villages with the voters register and marking people believed to support the opposition, an exercise CEON-U warns is likely to lead to tensions should people find their names missing from the register. “It was wrong for the state to train the group at the time they did. As far as I know there is no law that allows the police to train such a force, and so massively. Their role is unclear and so far they have already been involved in election-related illegalities. It is very unfortunate if violence breaks out, as the state will bear responsibility especially for training these so-called crime preventers,” noted Dr Sabiti Makara, who researches elections in Uganda. Source: theeastafrican