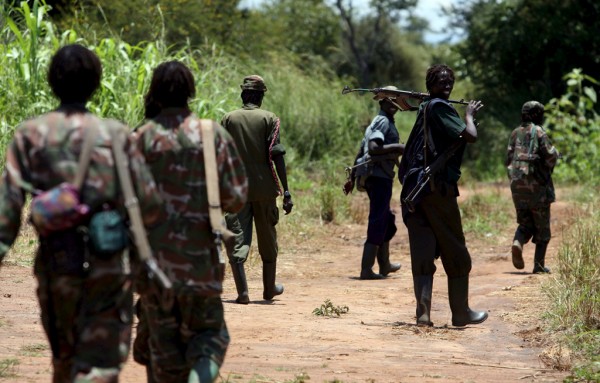 “We have a list of LRA chiefs who are wanted and considered dangerous… and the one who has just been handed over to American forces is commander Okot Odek,” said the police source in Obo, a city in eastern CAR where Ugandan and US forces tracking the LRA are based.

The source added that Odek’s identity had been confirmed by himself and by “certain elements” who had surrendered.

He was handed over to US forces on Monday by a faction of the Seleka rebels in CAR.

The trasnfer followed recent LRA attacks in the east and northeast of the country resulting in at least one death and dozens of abductions.

Odek was a senior commander and former key bodyguard for LRA chief Joseph Kony, an indicted war criminal who continues to evade a years-long international manhunt, though much of his force has been dispersed by African Union troops with US support.

According to UN estimates, the LRA slaughtered more than 100,000 people and abducted 60,000 children in a bloody rebellion against Kampala that began in 1986.

Odek was kidnapped by the LRA as a child around eight years old in the Gulu region of northern Uganda, a bastion of the rebellion.

He later rose to be LRA lieutenant-colonel, running militia forces in the Garamba national park in northeastern Democratic Republic of Congo (DRC).

The US-based Enough Project, which has long monitored the LRA, called Odek in 2010 “one of (the) LRA’s most able commanders”.

According to a US non-governmental group, Invisible Children, created to fight against LRA abductions, Odek may have surrendered rather than been captured.

On its website, the NGO suggests that perhaps Odek was afraid that “Kony had given orders to have him killed,” an action the LRA chief has taken in the past against commanders who fall out of favour.

It also said that messages from Odek calling on LRA fighters in CAR and the Democratic Republic of Congo (DRC) to surrender were ready to be broadcast on local radio.

The LRA finally crossed into southeastern CAR in March 2008, profiting from widespread unrest there that led the Seleka rebel alliance to overthrow former president Francois Bozize in March 2013.

A remnant of the Seleka group known as the Popular Front for the Renaissance of Central Africa (FPRC) also claimed to be behind the arrest of another wanted LRA commander Dominic Ongwen a year ago.

Ongwen was transferred to The Hague war crimes court shortly after he unexpectedly surrendered to US special forces.

Ledio Cakaj, an analyst who has long monitored the LRA, said that in terms of weakening of the rebels, Odek’s capture or defection is “far more important than (that of) Ongwen.”

The areas of CAR infiltrated by the IRA lie largely outside the control of the UN’s 10,000-strong MINUSCA peacekeeping mission stationed in the main cities.