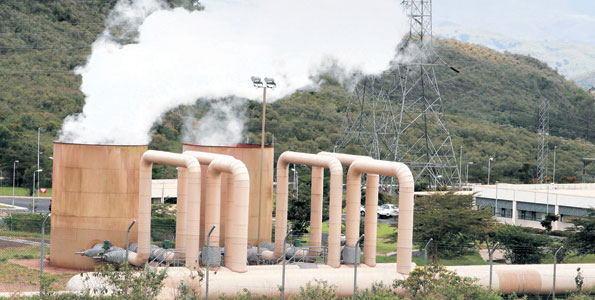 Green Impact Development Services (GIDS) is carrying out exploration and evaluation of geothermal resources with aim of developing a 100MW power plant at Buranga in western Uganda.

The Tanzania Geothermal Development Company (TGDC) is expected from June to start drilling three wells near Lake Ngozi in the southwestern the country as a first step to tap into underground geothermal steam.

Kenya, in 2014, commissioned at least 280MW from the Olkaria geothermal fields. This month, Ormat Technologies Inc commissioned the 29MW Plant Four at Olkaria III geothermal complex near Naivasha town, some 90km west of Nairobi, which increased the company’s generation capacity to 139MW.

Ethiopia’s installed capacity of 7MW geothermal power is set to rise to 70MW with a $30 million project to expand the Alutho Langano field.

Uganda’s Energy Ministry said the government is promoting the use of renewable sources such as geothermal energy, as alternatives to hydropower and fossil fuels generation.

GIDS said pre-feasibility studies at the Buranga project showed that subsurface water temperatures of 150 to 200 degrees Celsius are suitable for electricity production for direct use in industry and agriculture.

“The company is planning to drill three deep exploration wells at the prospect and develop 30MW well-head geothermal power plant units at each successful well,” said the firm. This will require at least $42 million.

Geothermal is a versatile energy form that can be used for a wide variety of direct applications such as spas, swimming pools, baths, heating greenhouses and dehydrating agricultural products.

Uganda and Rwanda have signed a memorandum of understanding with Kenya to help expedite geothermal development.

They are expected to benefit from the financial advice of the Kenya Electricity Generating Company and Geothermal Development Company.

Uganda and Tanzania are now at exploration stage.

“We cannot continue waiting due to the shortage of power the country has been experiencing,” he said.

Tanzania wants to produce 200MW of geothermal power by 2020.

Studies have shown subsurface water temperatures of 230 to 250 degrees Celsius. The government will help TGDC to find funds for the Lake Ngozi project, including inviting in investors.

TGDC has identified 50 potential sites from where 5,000MW of geothermal electricity can be produced.