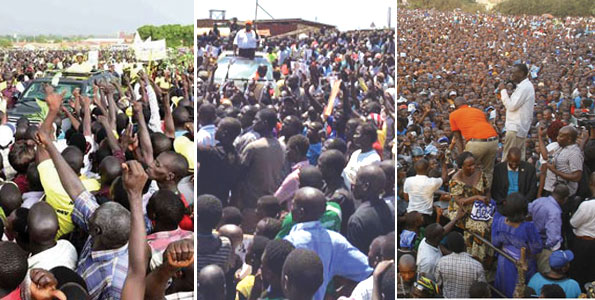 Key opposition candidate Kizza Besigye, a three-time loser who was briefly detained by police in chaotic protests on Monday, said he was still confident of ending veteran President Yoweri Museveni’s three-decade grip on power in the East African nation.

“The election cannot be free or fair, but it doesn’t mean it can’t be won,” Besigye told AFP, saying he was still aiming for an “outright win”, not a second round run-off in which the opposition might unify.

At least one person was killed Monday as police fought running battles with Besigye supporters from the Forum for Democratic Change (FDC) party.

“We believe we can win the unfree and an unfair election, that’s what we are trying to do,” Besigye said, before zooming off towards the city centre accompanied by some 300 supporters to hold rallies.

Many were riding motorbikes, waving tree branches and blowing whistles and horns, and wearing shirts with Besigye’s face emblazoned on the front.

“If rigged, as we expect, we will continue the struggle for democracy,” Besigye said. “The struggle will simply continue.”

Museveni is widely predicted to win a fifth term in power in Thursday’s polls.

Both Museveni and Amama Mbabazi, a former prime minister and ruling party stalwart now running as an independent, are also holding rallies on Tuesday. Campaigning is banned on Wednesday.

Seven opposition candidates are vying to deny veteran leader Museveni a fourth decade in power at the February 18 election and there are fears violence could mar the vote, with all sides accusing each other of arming militias to press their claims.

Police spokesman Fred Enanga said Besigye had been “in total disregard of his authorised programme” on Monday, and that one person had died in the chaos, with protestors “throwing bricks and projectiles” at officers.

“The police have a duty to protect the safety of the public, together with the right to protect themselves, and had to act accordingly, given the intensity of the attacks they faced from an emerging crowd of rowdy protesters,” Enanga said.

Police said 19 people were wounded, including a policewoman, and 22 people arrested.