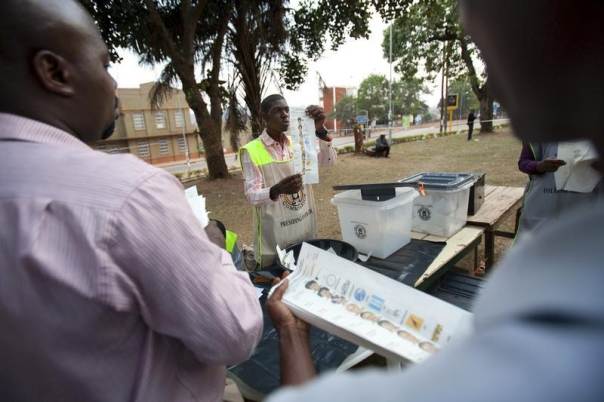 KAMPALA (HAN) February 6, 2016 – Public Diplomacy and Regional Stability Initiatives News. Ugandan women’s rights groups are setting up a control centre to monitor any violence against women in the East African nation’s elections this month and to act quickly on any reports.

The move comes after the United States voiced concern that the electoral environment in Uganda was deteriorating in the run-up to the Feb. 18 elections.

Violence during an election cycle is common in many African countries where it may be triggered by political or ethnic tensions, or flawed electoral processes, with women and children the most likely to be affected.

Jessica Nkuuhe, the National Coordinator of the Uganda Women’s Situation Room, said the control centre will be launched on Feb. 15 at a hotel in Kampala and run until Feb. 20.

Nkuuhe said there had not been reports of electoral violence targeting women in Uganda before but women did face more types of psychological violence, whether they are voters or candidates, and efforts to prevent them from voting.

“Incidences of domestic violence resulting from differences in the choice of party or candidates have also been reported,” she told the Thomson Reuters Foundation.

President Yoweri Museveni has governed Uganda for three decades since coming to power after waging a five-year guerrilla war. He is heavily favoured to win another five-year term but the election is expected to be his toughest yet.

The U.S. State Department last month said there had been numerous reports of police using “excessive force, obstruction and dispersal of opposition rallies, and intimidation and arrest of journalists”, adding to “an electoral climate of fear and intimidation”.

Patricia Munaabi Babiiha, the executive director of Forum for Women in Democracy (FOWODE), said the control room would employ women and youth and also involve police representatives and officials from the Electoral Commission.

She said 450 women and youth observers have been trained and deployed in 15 districts considered as hotspots to observe and report on the elections from a gender and violence perspective.

Also 10 youth volunteers have been trained to work as call operators to receive and record incidents from the field for processing and intervention when necessary.

“We shall have lawyers, communication specialists, data analysts, who will be able to decipher the information and call the necessary officials to go and resolve the issues wherever the incidents are reported,” she said.

The Women’s Situation Room is a concept that was first implemented under the Angie Brooks International Centre (ABIC) during elections in Liberia in 2011.

It started amid growing awareness that violence had become a norm of African elections and women needed to find ways to counter this.

The Women’s Situation Room has been successfully replicated during elections in Senegal, Sierra Leone, Nigeria and Kenya.