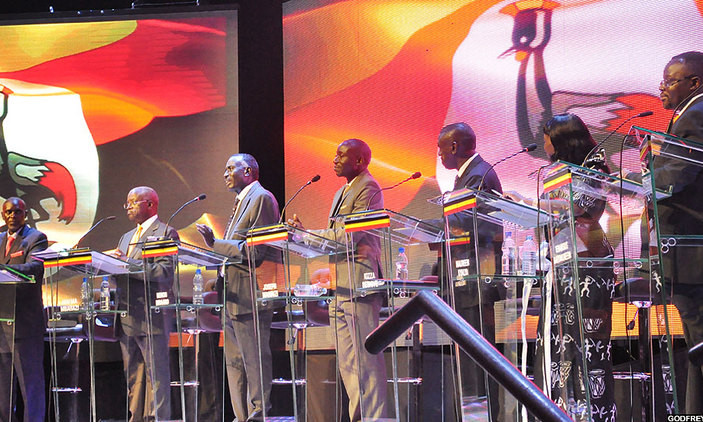 KAMPALA (HAN) February 4, 2016 – Public Diplomacy and Regional Stability Initiatives News. As the only female presidential candidate in Uganda, a male-dominated country where the leader is eyeing a fourth decade in power, Maureen Kyalya admits the odds are stacked against her.

Candidates on all sides have raised fears of violence, with accusations of police brutality and recruitment of volunteer police, known as “crime preventers”, as well as claims opposition groups are organising militia forces.

“He’s trained people he calls ‘crime preventers’, but their job is to beat everybody senseless to scare them that there’s going to be war, so they vote for him,” Kyalya said.

On Tuesday, former intelligence chief General David Sejusa, an outspoken critic of Museveni, was charged with taking part in politics against army law and remanded in custody.

With three weeks to go, campaigning is in full swing, but few analysts expect the seven opposition candidates will end Museveni’s 30-year rule.

Kyalya is brutally honest about her chances.

“I know that no matter how hard I try, I’m not actually going to get anywhere,” she told AFP, accusing Museveni of having rigged past polls.

Still, Kyalya, a 41-year-old former presidential aide, said she feels compelled to try, and insists Uganda is ready for a female president.

“Martin Luther King said the worst thing a great man can do, is do nothing,” she said.

Museveni, in power since 1986, will face his stiffest opposition from Kizza Besigye, a three-time loser for the Forum for Democratic Change (FDC), and Amama Mbabazi, a former prime minister and ruling party stalwart now running as an independent.

Besigye, once personal doctor to Museveni, has said Uganda stands at a “crossroads”, while Mbabazi has vowed to overturn changes to the constitution to restore term limits.

But with the two main opposition candidates being influential former members of the ruling party, critics say they struggle to offer a convincing alternative or to effectively criticise a system they created and benefitted from.

“Since independence, Ugandans have never experienced a turnover of power through the ballot box, and many question why February’s poll will be any different,” wrote Gabrielle Lynch from Britain’s University of Warwick, for the regional Nation Media group.

“Museveni and the NRM are spending a lot of money on their campaigns – with many arguing that expenditure is even higher than 2011 when excess spending helped fuel inflation and deplete state coffers,” Lynch added.

At the head of the National Resistance Movement (NRM) party, Museveni is widely expected to win another five-year term. Opposition challengers have failed to unite, dividing the vote of those opposed to his winning a fifth term.

The United States last month said it was concerned the electoral environment was “deteriorating”, saying that “reports of the police using excessive force, obstruction and dispersal of opposition rallies, and intimidation and arrest of journalists have contributed to an electoral climate of fear and intimidation”.

Other candidates include pastor Abed Bwanika, who has vowed to “rehabilitate homosexuals” and repatriate dictator Idi Amin’s remains from Saudi Arabia if elected – and fellow evangelist Joseph Mabirizi, who aged 40 is the youngest of the challengers.

For Mabirizi, the key thing Uganda needs to fix is rampant corruption. “The current regime has done nothing about it,” he said.

“Thirty years is exhausting,” added Bwanika, 49. “I don’t believe that there is a lot now President Museveni can offer in terms of energy, in terms of a vision for this country.”

Museveni won elections in 2011 with 68 percent of the vote, but Bwanika believes this time he could face a second round.

“If they are rigged, everyone should prepare for violence,” he told AFP.

“The whole country right now is getting nervous,” said lawyer Adrian Juuko, from Uganda’s Human Rights Awareness and Promotion Forum (HRAPF). “Museveni may still win, not necessarily because people love him, but because of the fear of violence erupting.”