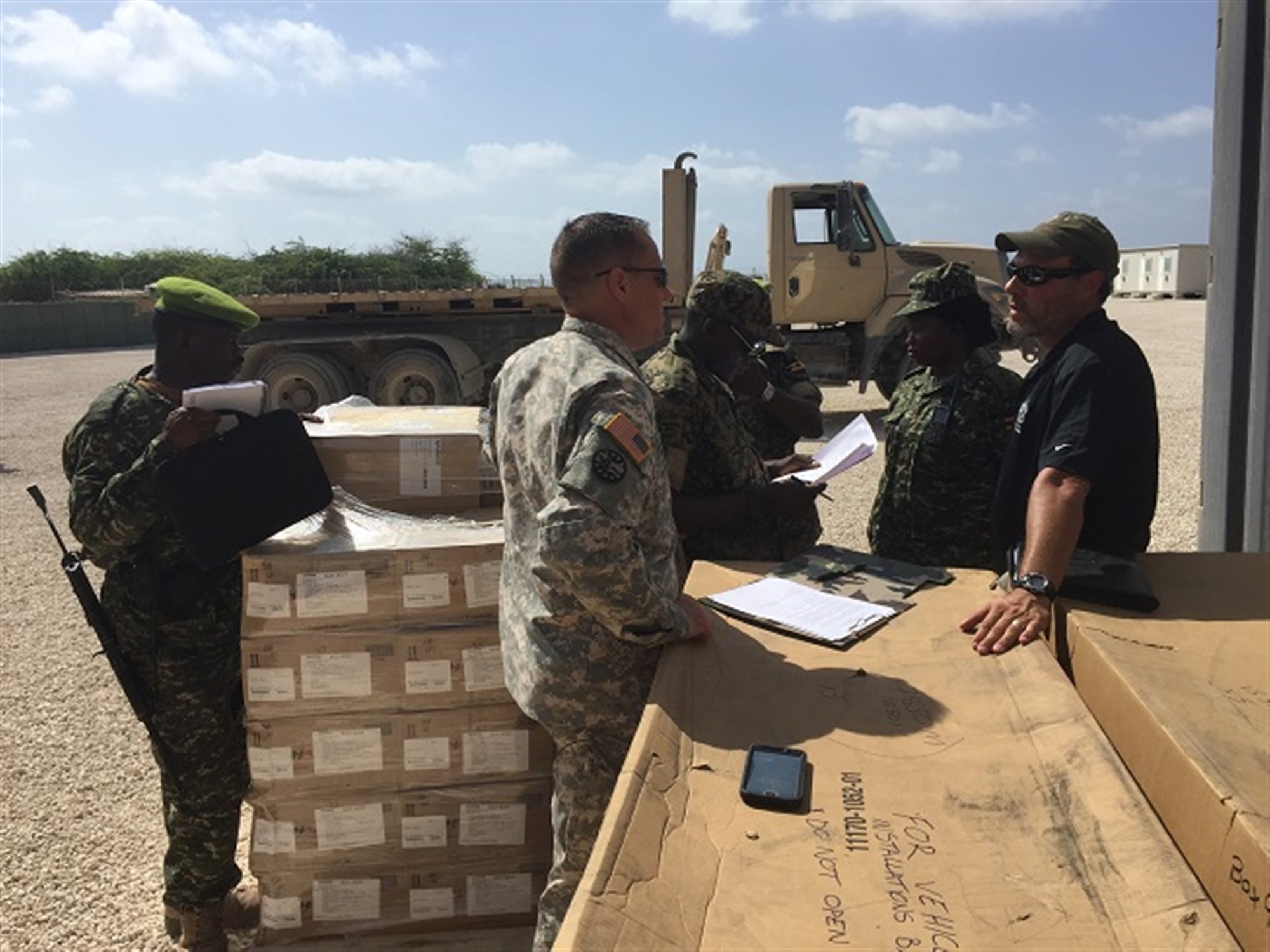 MOGADISHU (HAN) May 6.2016. Public Diplomacy & Regional Security News. In late March the east African country of Uganda took ownership of equipment from the United States as part of an ongoing mission to build international peacekeeping capacity and promote regional security operations in nearby Somalia. The U.S. equipment allows Uganda to perform the mission without deploying U.S. troops. It also strengthens the partnership with this country that works closely with U.S. Africa Command promoting regional security.

Uganda has supported AMISOM, the African Union Mission in Somalia, since 2007. AMISOM is a multi-dimensional peacekeeping mission approved by the United Nations to counter attacks from Al Shabaab, a militant affiliate of al-Qaeda, and other opposition groups as well as provide humanitarian assistance for the people of Somalia.

“The items are among a steady stream of deliveries for the Uganda People’s Defense Force to include everything from forklifts and trucks to printers.”

The U.S. Army Security Assistance Command is providing equipment to Uganda to support their efforts in Somalia. The equipment is available through the Global Train and Equip security assistance program, formerly known as “Section 1206,” and now called 2282, which authorizes the U.S. military to build the capacity of foreign security forces. The 2282 program is funded through the National Defense Authorization Act and used to equip, supply and train foreign militaries that support the U.S. military in joint operations.

A lot of the items are being used for engineering and logistical support in Somalia, according to David Dornblaser, who oversees the program and is director of USASAC’s Washington Field Office.
“The items are among a steady stream of deliveries for the Uganda People’s Defense Force to include everything from forklifts and trucks to printers,” Dornblaser said. “But, equipment has not been limited to construction items. Armored personnel carriers, helicopters, Mine Resistant Ambush Protected vehicles and uniforms have also been or are scheduled to be delivered to equip infantry units.”

The recent equipment delivery included radios and associated lithium ion batteries. A variety of radios, such as hand-held, vehicle-mounted and Manpack, have been supplied and are being used to manage communications between Ugandan personnel on the ground.

Typically, items received through the GT&E program will be shipped to the receiving government’s home country. However, Dornblaser noted, items are now frequently shipped directly to units supporting a mission outside their home nation and used in combat relatively quickly after arrival.

Derek Moore, a country case manager at USASAC’s New Cumberland, Pa. office, is responsible for ensuring all requirements are placed on a contract and shipped prior to the commitment date, said the GT&E team acted swiftly to coordinate diverting the shipment from Uganda into Somalia.

A full team effort from numerous organizations in the Army’s security assistance enterprise was behind supporting Uganda’s needs. In addition to USASAC, the U. S. Army Communication and Electronics Command, AFRICOM, Combined Joint Task Force — Horn of Africa, Office of the Under Secretary of Defense for Policy and the Defense Security Cooperation Agency partnered with the Department of State.

“Having numerous agencies working closely together ensured this program was, and continues to be, successful,” Dornblaser added.

And not only does providing equipment to a foreign government benefit the receiving country but the U.S. as well. The country is able to build a self-sustaining military and the U.S. gains a partner nation and ally in global missions.

“Uganda is comfortable with our program and will receive great support and equipment from us,” Dornblaser said. “Earning their trust is just a part of USASAC’s mission of strengthening global partnerships and building partner capacity.”