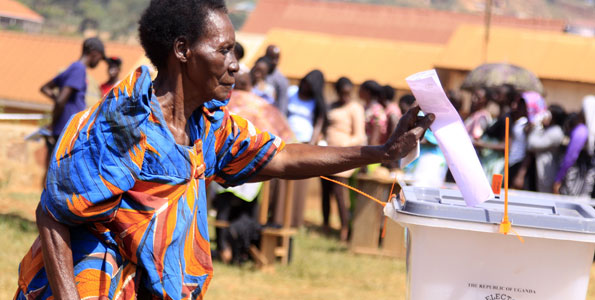 KAMPALA (HAN) February 18, 2016 – Public Diplomacy and Regional Stability Initiatives News. Ugandans across the country have turned out Thursday to vote in presidential elections, with the incumbent Yoweri Museveni seeking to extend his 30-year rule.

Seven opposition candidates are hoping to become the country’s next head of state in a race widely seen as the tightest in Uganda’s history.

15,277,196 registered voters are expected to file at 28,010 polling stations across the country, beginning 7am (0400 GMT) to choose a president and Member of Parliament for their respective constituencies with 290 seats being contested by candidates from 29 political parties. Voting ends at 4pm (1300 GMT).

President Museveni is facing his toughest battle to remain at the helm as Kizza Besigye and Amama Mbabazi having gained increased public support.

Dr Besigye, the main opposition leader, has challenged Museveni in three elections unsuccessfully but is confident of a first-round win.

The leading presidential candidate requires more than 50 per cent of votes cast to avoid a second round run-off.

Mbabazi, a former prime minister and ruling party stalwart, has already accused the Museveni’s party of planning to stuff ballot boxes, a claim government spokesman Ofwono Opondo dismissed as the “cry of a loser”, according to the Daily Monitor.