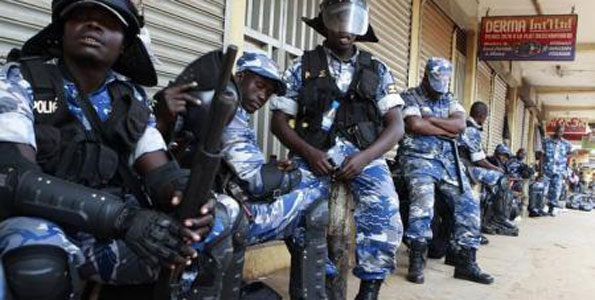 KAMPALA (HAN) February 9, 2016 – Public Diplomacy and Regional Stability Initiatives News. Uganda has bought anti-riot gear ahead of a February 18 election in a move which police say will bolster security during voting but which critics say aims to intimidate opponents of President Yoweri Museveni, who is seeking to extend his 30-year rule.

Critics have accused him of using violence by security personnel to intimidate opposition supporters, while police have drawn public ire for frequently blocking opposition gatherings or using teargas and sometimes live ammunition to disperse them.

Police spokeswoman Polly Namaye said they had bought a consignment of equipment to help them secure the poll.

“In the process of ensuring that we secure the election … we have had to purchase equipment that we believe will help us in transportation, in crowd control and public order management,” Namaye said.

Namaye did not give specific details of the equipment that had been bought, but said some had already arrived.

In recent days pictures of water cannon trucks and armoured trucks parked at Kenya’s Mombasa seaport and with “Uganda Police” emblazoned on them have circulated on social media.

“They (anti-riot gear) will have an intimidating effect… it’s going to be difficult to convince us that these things have been bought for legitimate security concerns,” she said.

Last month police chief Kale Kayihura provoked public outrage after he was quoted in a local newspaper telling a civilian anti-crime force to prepare for “war” after the coming election.

The east African country last had mass protests shortly after the last election in 2011 when people took to the streets to demonstrate against high consumer prices, corruption and Museveni’s long rule.