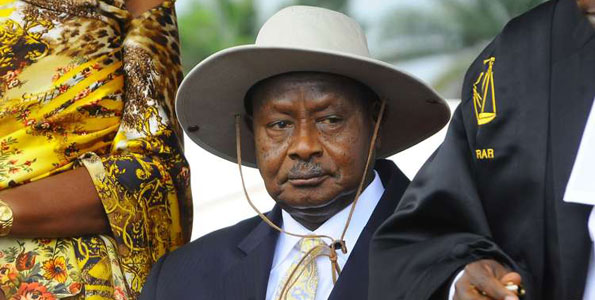 KAMPALA (HAN) May 15.2016. Public Diplomacy & Regional Security News. By HALIMA ABDALLAH. After President Yoweri Museveni’s swearing-in, attention now shifts to constitutional reforms, with some leaders suggesting that removal of the age limit is the only remaining hurdle that can stop President Museveni, 71, from extending his stay at the expiry of his current term in 2021.

Constitutional and electoral reforms remain key demands from both the opposition and activists. However, these demands are being countered by quiet mobilisation within the ruling National Resistance Movement to remove any hurdles to another Museveni candidature after the next five years.

It was understood that the matter came up for discussion at the new NRM MPs induction retreat in Kyankwanzi Leadership Training Institute between March 25 and 30.

At his inauguration, President Museveni focused on his agenda for the next five years and launched a vitriolic attack on the West’s hypocrisy in regard to the International Criminal Court.

Other leaders described by a senior NRM party insider as “third term presidents” to mean leaders who have either changed or are seeking to change their constitutions to stay in power include Zimbabwe’s Robert Mugabe and Equatorial Guinea’s Teodoro Obiang Nguema Mbasogo. Both leaders are above 75 and have held power for more than 30 years.

Any amendment of the Constitution may also try to deal with a strict provision requiring one to be declared winner of a presidential election after garnering 50 per cent plus one of the vote.

“It is not easy to say that this swearing in will be the last for President Museveni,” said Cecilia Ogwal, opposition chief whip.

Throughout the campaigns, President Museveni did not mention retirement even once — even during the swearing in ceremony.

Removal of the age limit has become a controversial debate. Last year, the issue resurfaced but it was not included in the items that were agreed upon for constitutional amendments in August 2015.

Sources earlier toldThe EastAfrican that in 2005, removal of the age limit formed part of the constitutional amendments, but the Cabinet deferred it in favour of removal of presidential term limits, “which was urgent.”

“The age limit was pushed by the then NRM-leaning members of the Constituent Assembly to block Milton Obote from coming back and contesting the presidency. We, in the opposition resisted it strongly, but in the corridors, they would tell us that they did not want Obote back,” said Ms Ogwal.

Legal experts, however, explained that some amendments will require a referendum, meaning that NRM will have to rally the whole country for the amendments to sail through.

Others like the age limits, experts said, will only require support of the legislators, an assignment that NRM can comfortably execute in parliament since it has numerical strength in the House.