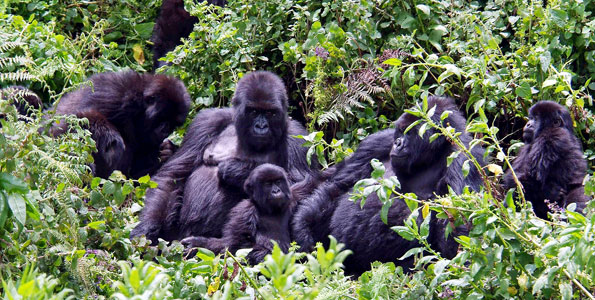 KAMPALA (HAN) January 30, 2016 – Public Diplomacy and Regional Stability Initiatives News. The Democratic Republic of Congo and Uganda are under pressure from environmentalists not to explore for oil and gas resources in the Virunga area — a Unesco-listed global heritage site.

The development leaves the two countries at crossroads as they struggle to balance conservation priorities while fulfilling commercial obligations to oil companies that have invested in the area.

Over 60 environmental and tourism groups recently joined the European Parliament and Unesco in urging the two governments to stop the issuance of new drilling licences and cancel those already awarded in Virunga National Park and the surrounding areas.

Uganda is expected to issue new exploration licences to 16 companies in mid-February. The government started the new licensing round in February 2015, offering six blocks covering 3,000 square kilometres in the Albertine Graben, which fall within Virunga.

The blocks lie within the Queen Elizabeth National Park and Lake Edward Basins, which are part of a shared ecosystem that belongs to both countries.

“The World Heritage Committee has adopted a clear position that oil exploration is incompatible with a World Heritage status,” reads an August 24, 2015 letter addressed to Uganda’s permanent ambassador to Unesco Nimisha Jayant Madhvani.

In 2013, Total halted operations in the Albertine region in DR Congo’s Virunga areas in favour of conservation. Total owns a 60 per cent share in block three while the DR Congo government owns 15 per cent. Drilling operations will now be conducted around Ituri province, an area outside the Virunga territory.

Clashes between the two countries over access to exploration wells in Lake Albert have been witnessed in the past, prompting bilateral peace efforts.

Though President Yoweri Museveni of Uganda and President Joseph Kabila of DR Congo agreed to carry out joint exploration activities, ongoing activities on either side of the borders show that the two countries are not complying with the Ngurdoto agreement signed in Tanzania in 2008.

Both DR Congo and Uganda are signatories to the World Heritage Convention, which makes it obligatory for state parties not to take any deliberate measures that may directly or indirectly damage the cultural and natural heritage situated on the territory of other state parties to the convention.

In 2014, Soco International, a British oil company, carried out seismic testing for oil on the Congolese side of Lake Edward in Virunga, prompting widespread local opposition and an international outcry.

The controversy over its oil licence was captured in the Oscar nominated documentary Virunga. In November 2015, Soco was forced to abandon its operations in the Virunga area.

In December 2015, the European Parliament passed a resolution intended to protect the Virunga area from any kind of oil and gas related activities. This decision follows a June 2015 report by Global Witness that showed Soco had paid huge sums of money to a Congolese military officer to silence opponents of its oil exploration activities in Virunga National Park.

“Drilling for oil in Lake Edward may have a devastating impact on Virunga, the local people and wildlife in Uganda,” said George Boden, a senior campaigner at Global Witness and a spokesperson for the group.

“Oil activity in one part of the lake will affect all of it. Unesco and the governments of Uganda and DR Congo need to act urgently to stop oil exploration in the entire lake for good,” said Boden.

Out of the 29 wells dug, 28 showed prospects for oil or gas or both while over five trillion cubic feet of gas have been discovered in eastern DR Congo.