Home frontpage Uganda: Museveni’s son a heartbeat away from Presidency 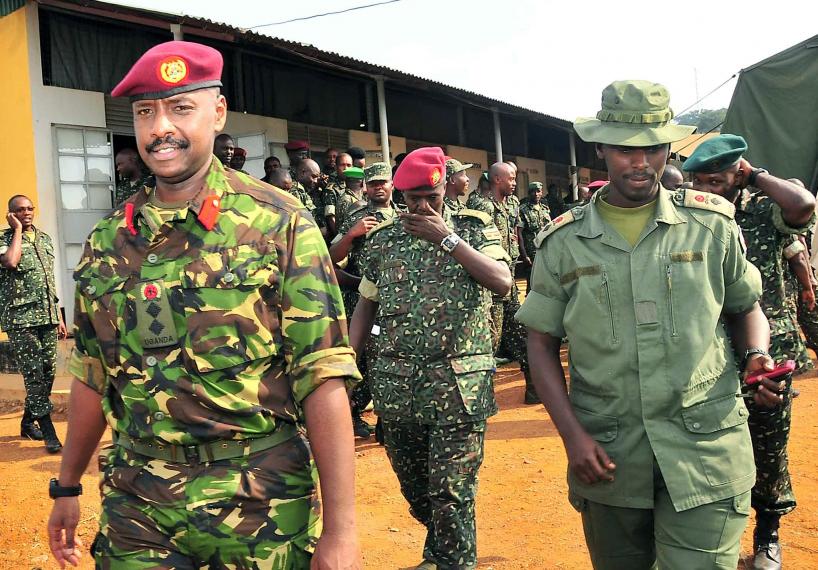 By Julius Barigaba. Ugandan President Yoweri Museveni appears to have completed a largely smooth transition of the military by placing Young Turks at the helm of the army hierarchy.

On Monday January 9, president and Commander-in-Chief Museveni made changes in the army leadership, promoting Maj-Gen David Muhoozi, 51, to full General and appointing him Chief of Defence Forces to replace Gen Edward Katumba Wamala, 61, who moves to the Ministry of Works as a junior minister.

In an equally significant move that has dominated public debate all week, the president named his son Maj-Gen Muhoozi Kainerugaba Special Presidential Advisor for Special Operations.

Thus in the Muhoozi duo, (the two are not related), Museveni has given a glimpse of the future; on one hand he has a young, level-headed and trusted CDF to head the army, which is the most loyal power centre of the regime, and on the other, he has a roving president in his son who will be at his beck and call to handle sensitive assignments.

In his new role, Maj-Gen Kainerugaba will not be tied superior command in the army but will continue to wield unfettered influence. He can also safely play political roles without raising suspicion, similar to the role the president’s younger brother Gen. Salim Saleh has effectively played for years. Removed from public scrutiny, Saleh is the single most influential power broker in the country.

Uganda People’s Defence Forces spokesman Lt Col Paddy Ankunda said in his new role, Maj-Gen Kainerugaba, who until the Monday reshuffle was head of the elite Special Forces Command, which among other things is also in charge of the president’s security “will carry out special duties assigned to him by the Commander-in-Chief, in and outside the military”.

Other commentators are of the opinion that even without command, special operations is a serious deployment that means Maj-Gen Kainerugaba will handle sensitive assignments outside the country on behalf of the head of state.

On January 26, Mr Museveni caps 31 years as president of Uganda. Immediately after taking power in 1986, Museveni established a “broad-based government” that was not organised along political party lines but instead sought to create among the political class shared common interests like national security, economic prosperity and patriotism.

But after the 2005 referendum when Uganda voted to return to multiparty politics, and after the 2006 elections when independent-minded lawmakers within his ruling party started becoming vocal and questioning certain decisions, President Museveni realised that it was difficult to command the unquestioning loyalty that was needed for a smooth transition.

Multiparty politics came with new challenges, top being internal dissent in his own party, unlike in the army where discipline is instilled through the command structure.

In addition, Museveni had the military acumen that enabled him to keep tabs on the army, identify and isolate errant characters like former coordinator of intelligence services Gen David Sejusa and former army commander Maj-Gen James Kazini, while at the same time building a new leadership that some critics say he centred around his son through the Presidential Guard Brigade now called Special Forces Command.

Hence the Ugandan leader has carried out reshuffles that have seen army generals take a break from the military — either for good or into semi-retirement – to take up Cabinet positions to handle strategic projects that Mr Museveni is not comfortable to hand to civilian bureaucrats whom he has criticized as corrupt and unpatriotic.

Some of these include the National Identity Card, which was handed to former CDF Gen Aronda Nyakairima when he left the military command in a reshuffle and became minister of internal affairs, until his death in September 2015, Operation Wealth Creation, which is headed by Gen Caleb Akandwanaho aka Salim Saleh, and the multi-billion dollar standard gauge railway project, whose construction the immediate former CDF Gen Katumba Wamala is set to oversee, supervising UPDF officers working on this project.

However, opinion is divided on whether Gen Katumba Wamala was dropped from the powerful position and simply shunted in an inferior position in a political office.

Sources argue that, like his predecessor Gen Nyakairima who was CDF from 2003-2013, Gen Wamala is said to have been uncomfortable with some of the political manoeuvres that the military was used for, and was not keen to lend a blind eye to such schemes.

For instance, analysts argue that the comments Gen Wamala made recently before Parliament that he had no knowledge of or involvement in the army attack in November 2016 on the palace of the Obusinga Bwa Rwenzururu King Charles Wesley Mumbere in Kasese district that left over 100 people dead did not go down well with the Commander-in-Chief.

The operation culminating in this attack was commanded by Brig Peter Elwelu, the commander of the UPDF Second Division. In the Monday reshuffle, Elwelu was promoted to Major General and appointed to Chief of Land Forces.

But the UPDF says redeploying Gen Katumba Wamala to the strategic docket of works, albeit in a junior capacity, is no demotion but a considered move similar to those the commander in chief has pulled off before.

“How can it be a demotion? When you move from being CDF to a state minister, that is very strategic. This is a busy ministry that will construct the standard gauge railway and UPDF has a big role to play. I can tell you in terms of hierarchy, the CDF salutes the state minister. So this is not a demotion,” said Col. Ankunda.

Godber Tumushabe, a public policy researcher and analyst who has studied Museveni’s style of politics over the years, agrees that this sort of transition from an army to a civilian role is consistent with his statecraft; assured that the army is in safe hands, the Commander in Chief has deployed older officers into “civilian roles without losing their loyalty.”